The incident, the first suicide attack on a police post in over a year, came hours before a unilateral three-day ceasefire announced by a Kashmiri alliance, United Jehad Council (UJC), began on Friday ahead of the holy Muslim festival of Eid al-Fitr.

Clashes between Indian troops and separatist fighters have gone up in Kashmir since the beginning of Ramadan.

More than 36 fighters and 10 soldiers were killed in fierce firefights in the first 12 days of October.

Police meanwhile are interrogating Indian and Bangladeshi pilgrims after a blast on Thursday at a venerated Muslim shrine in northern India killed two people and wounded 17 others, officials said.

The blast, which targeted the shrine of a 12th century Sufi saint in the town of Ajmer, took place as hundreds of men and women broke the daily fasts they observe during Ramadan.

No arrests have been made so far in connection with the blast.

India has routinely blamed Pakistani and Bangladeshi-based groups for a series of attacks that have rocked the country over the last two years including several at mosques.

However, little concrete proof has been provided in the past and both Pakistan and Bangladesh have denied the involvement of their nationals in the attacks. 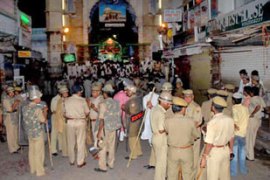