The resolution and a companion bill in the senate are strictly symbolic and do not require the president’s signature.

“Unfortunately some politicians in the United States of America have closed their ears to calls to be reasonable and once again sought to sacrifice big problems for small domestic political games,” Gul was quoted as saying by the state news agency Anatolian.
“This unacceptable decision of the committee, like similar ones in the past, is not regarded by the Turkish people as valid or of any value.”
Ankara rejects the Armenian position, backed by many Western historians, that up to 1.5 million Armenians suffered genocide at the hands of Ottoman Turks during World War I.
Damage to ties
Turkey has warned of damage to bilateral ties and military co-operation if congress passes the measure.

“This resolution is not the right response to these historic mass killings, and its passage would do great harm to our relations with a key ally in Nato and in the global war on terror,” Bush had said before the vote.
The bulk of supplies for troops in Iraq pass through Turkey’s Incirlik airbase, and Turkey provides thousands of truck drivers and other workers for US operations in Iraq.
Supplies also flow from that base to troops in Afghanistan.
Advocates of the resolution said Turkey should simply acknowledge history and stop threatening retaliation.
“I think our relationship is important enough to the United States and Turkey to survive our recognition of the truth,” Adam Schiff, the chief sponsor of the resolution with many Armenian-Americans in his district, said after the vote.

The committee vote followed hours of sometimes emotional debate over whether, as the panel’s chairman Tom Lantos said, legislators should “condemn this historic nightmare through the use of the word genocide” and put military co-operation with an upset Turkey at risk.

Gregory Meeks, a black Democrat from New York, said congress should focus on the failings of US history, such as slavery or the killings of Native Americans.
“We have failed to do what we’re asking other people to do… We have got to clean up our own house,” he said.
The White House was “very disappointed,” but a spokesman said Bush hoped the whole House would reject the bill.
Source: News Agencies 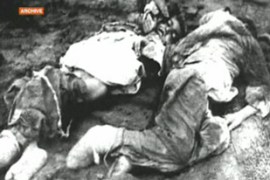 Armenia open to talks with Turkey