Abbas, who will attend a US-sponsored conference on Palestinian statehood next month, has ruled out re-engagement with Hamas unless it submits to his authority and ends its control of Gaza.
In the website statement, Haniya said Hamas’s “administration in Gaza is temporary”.
He said talks with Fatah would be held after Eid al-Fitr, the Muslim festival that ends the fasting month of Ramadan and falls on Friday or Saturday.

Al Jazeera’s correspondent in Gaza, Nour Odeh, said Haniya may have been playing to opinion polls that say a majority of Palestinians want reconciliation.

Fatah response
Hazen Abu-Shanab, a Fatah spokesman, told Al Jazeera that there was “no concrete, no real offer from Hamas”; that it was “nothing really new”.

“We hope it can be something serious … but it’s not obvious.

“It’s not enough to have good words over the media from Hamas, we want action on the ground,” he said.

“We want Hamas to admit that it made a very big sin by making this coup.”

Gaza has been even more isolated from the rest of the world since Hamas took power after a violent confrontation with Fatah.

Al Jazeera’s senior political analyst, Marwan Bishara, said Hamas may be feeling left out of the action in recent weeks building towards a US-sponsored November peace conference that would involve the Fatah-controlled Palestinian government, Israel and major Arab players.

He said that Fatah and Hamas, after flexing their muscles, must know that there is nothing more to gain and must climb down from their positions and consider reconciliation.

Gaza’s government “is ready to offer a truce at this time”, Mohammed Awad, a senior Hamas official, had then told a website affiliated with Hamas.

Awad’s office later confirmed he had made the statement.
In mid-September, the Israeli government declared Gaza a “hostile territory” in an effort to increase pressure on Hamas to stop rockets being fired from there.
The classification set the stage for a possible choking off of essential services such as electricity to the territory of 1.4 million people, but so far it has not been carried out.
On Wednesday, a second Israeli bank said it was severing business ties with Palestinian banks in Gaza.
Israel Discount Bank, Israel’s third-biggest bank, said in a statement it would “stop all transactions with affiliated banks in the Gaza Strip and with other bank branches located there”.
The biggest, Bank Hapoalim, cut off ties with Gazan banks on September 25.
Source: Al Jazeera, News Agencies 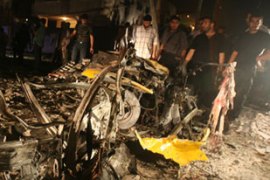 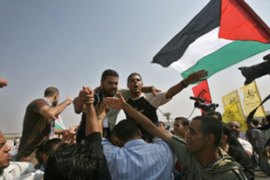