El-Masri said he was released five months later in Albania without any explanation, and is now demanding an apology from the US government and $75,000 in compensation.

Meanwhile on Tuesday a US federal judge blocked the Pentagon from transferring a Guantanamo Bay detainee to Tunisia where he allegedly faces torture, in a landmark ruling in the treatment of detainees.

District Judge Gladys Kessler granted a preliminary injunction to halt a move by the defence department to transfer Mohammed Abdul Rahman to Tunisia.

Rahman, who has a heart condition, was convicted in absentia in Tunisia and sentenced to 20 years in prison. He was captured in Pakistan and allegedly handed over for a bounty.

Gordon England, the deputy secretary of defence, cleared Rahman for transfer after a military panel heard his case in 2005.

The October 2 ruling, kept under seal until Tuesday, is an unprecedented direct intervention in the case of a Guantanamo Bay detainee, a human rights group and Rahman’s lawyers said.

Jennifer Daskal, senior counter-terrorism counsel for Human Rights Watch, said: “This is the first time since congress tried to strip court jurisdiction over detainees that a court stepped in and said to the administration, ‘Hey wait. You can’t do what you say you want to do.'”

Some 330 men accused of links to al-Qaeda or the Taliban remain held at the US military prison in Cuba.

Joshua Denbeaux, Rahman’s lawyer, praised the ruling.
“It’s the first time the judiciary has given a detainee any substantive right, in this case it is the right not to be tortured by the Tunisian government,” he said.

The Bush administration is not likely to welcome Kessler’s ruling, but will welcome the verdict in el-Masri’s case.

It had called on the Supreme Court to reject the case for reasons of national security, arguing it could neither confirm nor deny el-Masri’s allegations without revealing the secret activities of the CIA.

El-Masri’s lawyers from the American Civil Liberties Union challenged what they called the Bush administration’s increased invoking of national security secrets to prevent any judicial inquiry into serious allegations of misconduct.

El-Masri’s case sparked outrage in Germany and prompted a parliamentary inquiry to find out what the authorities might have known about US “renditions”.

The Bush administration has also used the so-called state secrets privilege in an effort to dismiss lawsuits over a domestic spying programme created after the September 11, 2001 attacks.

El-Masri’s lawyers said “as a matter of law and common sense, the government cannot legitimately keep secret what is already widely known”.

If the Supreme Court rejected el-Masri’s case, then “the government may engage in torture, declare it a state secret and by virtue of that designation avoid any judicial accountability for conduct that even the government purports to condemn as unlawful under all circumstances”, they said before the ruling was handed down. 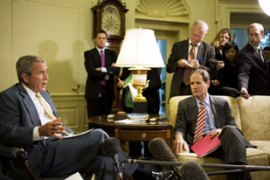