The UAW said earlier this week that it would strike if the two sides failed to agree on a new deal on wages and benefits for 49,000 US factory workers and more than 77,000 families of Chrysler retirees.

Several workers said they were prepared to strike for a protracted time to get guarantees of job security from Cerberus Capital Management, a private equity company that owns Chrysler.

Michael Garner, 51, a pipe-fitter at a Chrysler stamping plant in Warren, Michigan, said: “The American labour force is the sacrificial lamb for the global economy.”

The idled Chrysler assembly plants outside the strike were the Conner Avenue and Jefferson North assembly plants in Detroit, Warren Truck outside Detroit, Belvidere, Illinois, and Newark, Delaware.

Buzz Hargrove, president of the Canadian Auto Workers union, said that a Chrysler plant in the Canadian city of Ontario was due to be shut on Wednesday with a second Canadian plant in line to be left idle on Thursday because of a parts shortage caused by the US strike.

The UAW and Chrysler had been in talks that began on Tuesday morning and continued until the strike deadline on Wednesday.

The strike comes after the UAW pushed for job security at a time when Chrysler and Cerberus want to reduce operating costs in areas such as employee health care.

Chrysler’s larger rival GM reached its own cost-cutting deal that ended a two-day strike on September 26.

Chrysler was taken over by Cerberus in August. Former parent company Daimler AG retains a stake of about 20 per cent.

Chrysler’s US sales have dropped by three per cent during September, and ranks behind GM, Toyota and Ford. 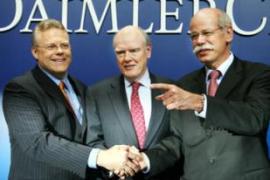 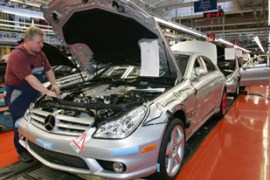 Car giant will work in a joint venture to make Mercedes-Benz vans in China.