Gates made the comments in a speech to the Association of the United States Army on Wednesday.

He said the army may also need to re-examine its policies for promotions and assignments to make sure the best and brightest officers, who he said had learned much over the past six years of war, stay in the service.

Army and Pentagon leaders have warned repeatedly that the long, deadly and repeated deployments in Iraq and Afghanistan have stretched and stressed the army, its soldiers and its families nearly to breaking point.

As a result there has been an ongoing debate about how the service should evolve to better meet the challenges of future wars.

Gates said that after the Vietnam war, the military spent little time training for irregular conflicts.

This had left the army “unprepared to deal with the operations that followed in Somalia, Haiti, the Balkans, and more recently, Afghanistan and Iraq, the consequences and costs of which we are still struggling with today”.

Gates alluded to the training and mentoring of Iraqi soldiers that US forces are now undertaking.

He said that “the most important military component in the war on terror is not the fighting we do ourselves, but how well we enable and empower our partners to defend and govern their own countries”.

His call for a greater emphasis on learning other languages is a recognition of the problems the military has had recruiting and keeping enough Arabic speakers.

Gates said that until other civilian agencies, such as the Agency for International Development, are strengthened, the military will need to take on many of the rebuilding tasks, as it has done in Iraq.

Pentagon leaders have repeatedly argued that as Iraqi forces are gradually able to take over the security of their own country, US troops will be able to leave.

Gates said that training foreign armies, once the focus of special operations forces, would now become a mission for the US military as a whole.

However, determining how best to do that, would require innovative thinking, he said.

Another challenge for the army, according to the defence secretary, is improving its technologies, while not losing the human element of intelligence gathering.

He pointed to the billions of dollars that has spent trying to find a way to deal with the roadside bombs being used in Iraq.

He said the best weapon against them “is to get tips from the locals about the networks and the emplacements” or to prevent people from planting them.

Gates’ remarks came a day after General George Casey, the  army chief of staff, predicted that the army will be facing a protracted period of confrontation.

Gates said that while he believes the army “is certainly not broken, it is under stress, and, as Casey recently put it, ‘out of balance'”.

The defence secretary argued that the army has been underfunded in the past, and that the government needs to provide enough money for personnel and equipment in the coming years.

He said: “Resources are needed not only to recoup from the losses of the war, but to make up for the shortfalls of the past and to invest in the capabilities of the future.” 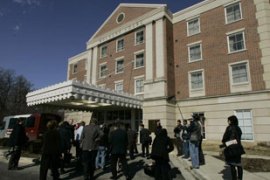 Secretary of US army dismissed

The US president calls for investigation of poorly run veteran health facilities.

A new US Army manual has been published which bans torture and the degrading treatment of prisoners, detailing for the first time some of the abuses which have become infamous since the September 11, 2001 terrorist attacks.

US army to replace Halliburton

The US army has said it will not renew its contract with Halliburton, the oil service company formerly run by the US vice-president, Dick Cheney. 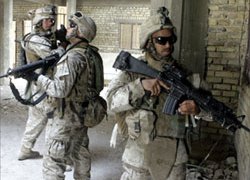 The US Army, hard pressed to attract new soldiers amid the Iraq war, seems doomed to miss its target for the year.