Prosecutors said he extracted information from prisoners during the Catholic practice of confession and took money from families of prisoners ostensibly to help send the detainees into exile when they had already been killed.
Verdict welcomed
Fireworks exploded outside the federal courthouse after Judge Carlos Rozanski announced the conviction and prison sentence handed down by a three-judge federal panel.

Inside the court, the Mothers of the Plaza de Mayo, a human rights group still seeking “missing” sons and daughters from the period, cheered loudly.

“Justice has been done. This is a historic day we Mothers of the  Plaza de Mayo never thought we’d live to see,” Tati Almeyda, a member of the group said.

Adriana Calvo, of the association of former detainees and the missing, said: “That a court has acknowledged that genocide exists in our country is an encouragement for us to carry on and justifies so many  years of struggle.”

Al Jazeera’s Lucia Newman said von Wernich showed little emotion when the verdict was read out.
She added that in theory, von Wernich, 69, had the right to be moved to house arrest once he turned 70.
Earlier, using biblical language, the priest professed his innocence during mere minutes of final testimony after his defence spent hours in closing arguments.
“False testimony is of the devil because he is responsible for malice and is the father of evil and lies,” he said, prompting murmurs in the courtroom packed with torture survivors and human rights activists.
Detention centres

Prosecutors said von Wernich had been linked by survivors to at least five clandestine detention camps in Buenos Aires province.

During the three-month trial, more than 70 witnesses testified and judges toured former torture centres at police stations with survivors.

The “dirty war” officially left some 13,000 dead or missing, although human rights groups have put the toll at nearly 30,000.
Juan Martin Cerolini, von Wernich’s defence lawyer, argued that as part of his duties as a priest, the defendant was obliged to visit police detention centres but that did not mean he played any part in the state crackdown.

He rejected survivor testimony suggesting von Wernich – who wore a bullet-proof vest over his clerical collar during the trial – conspired with police to help extract information from prisoners under the guise of giving them spiritual assistance.

Von Wernich said in his last words to the judges that he never violated the priestly prohibition against revealing information obtained in the Roman Catholic practice of confession.
“No priest of the Catholic church … has ever violated this sacrament,” he said.
Stricken with pain

The Catholic church, in a statement issued immediately after the verdict was announced, said it was stricken with pain at seeing “a priest participating in very serious crimes.”

“If any member of the church … by recommendation or complicity, endorsed the violent repression, he did so under his own responsibility, straying from and sinning gravely against God, humanity and his own conscience,” Jorge Bergoglio, Buenos Aires archbishop, said.

Rights organisations allege that the church turned its back to the atrocities committed during military rule and even covered up rights violations, which included the deaths and disappearances of priests and nuns.
The von Wernich case is the biggest human rights trial in Argentina since former police chief Miguel Etchecolatz was convicted in September 2006 in the same La Plata courthouse.
The trials came after the Supreme Court in 2005 annulled amnesty laws blocking prosecution of scores of former state security agents or their civilian allies.
Source: Al Jazeera, News Agencies 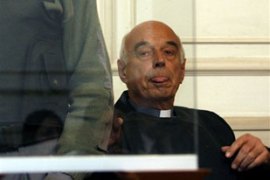