“We’re into the nuts and bolts now of implementing denuclearisation,” Christopher Hill, the chief US envoy to the talks, told reporters before flying back to the US.

He said the draft plan “lays out an entire road map until the end of the year” for the North’s nuclear disarmament.

Under a plan agreed in February the five other parties in the talks agreed to give North Korea aid, security guaranties and other benefits in return for it verifiably ending its nuclear programme.

Hill said the details of the plan made it necessary for him to return to Washington for consultations.

A copy of the proposed deal has not yet been released but Chun Yung-woo, the South Korean negotiator, said it set some key deadlines for North Korea and for the other parties to meet.

He said North Korea reiterated its December 31 deadline for declaring and disabling its nuclear programmes and accepted that other parties would not be able to deliver all their promised aid within that time.

Chun said South Korea would only have delivered about a third of the economic and energy assistance it has promised by year’s end.

And while the US also restated its intention eventually to remove North Korea from a list of countries it says sponsor “terrorism”, the draft plan does not set a deadline for that to take place, Chun said.

Despite the recess, envoys characterised the meeting as a step forward, with Chun praising North Korea for showing flexibility.

China, the US, Japan, Russia and North and South Korea are trying to push forward a February agreement under which Pyongyang agreed to declare and dismantle all its nuclear weapons programmes in return for 1 million tonnes of heavy fuel oil and other assistance.

The latest round of six-party talks had aimed to set final terms for the North’s declaration and dismantling of its nuclear programme.

Under the original timetable agreed in February, those terms should have been agreed to five months ago.

The six-party talks have seen frequent stops and starts since they began four years ago, but if they are ultimately successful, the talks could roll back a nuclear programme that saw North Korea detonate its first nuclear device in October last year. 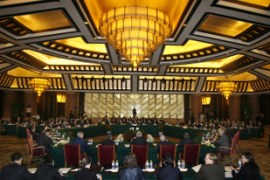 N Korea talks inch toward accord

The latest round expects N Korea to declare all nuclear programmes it has developed.