Al Jazeera’s correspondent in Myanmar says thousands of government troops are on the streets to quell any sign of further unrest after anti-government protests. He has not been named for his own safety.

With Yangon under an enforced military lockdown, there are fears that this latest sweep for democracy may face meltdown.

On Sunday thousands of soldiers swamped the city to prevent any demonstrations that could have gained the attention of Ibrahim Gambari, the visiting United Nations envoy sent by the international community in the hopes of securing a political solution to the crisis.

On the eve of Gambari’s visit there are reports that hundreds of people had been rounded-up and arrested.

Civilians on the streets were subjected to searches and questioning at checkpoints set up across the city centre.

I walked around the city and noticed jittery soldiers, their fingers still on triggers, eyeing people suspiciously, especially foreigners.

But there was a strange kind of normality that returned to Yangon.

On a road bridge from which soldiers fired at demonstrators on Friday and the street corner where they cracked heads and made arrests on Saturday, people either walked or carried on their business – Yangon back to normality.

Normality that is, under a military stranglehold which has seemingly choked the life out of the protests for democracy.

But the word on the streets is that while the lockdown may have choked the democracy protests for now, they have not killed them off.

In the doorway of a small barber shop a man spoke to me in excellent English. He said he was a lawyer.

The protests, he told me, were not finished, merely on hold.

“It may take a few days or even a few weeks, but they will happen again” he said.

How did he know?, I asked him.

“Stick around and watch,” he replied. Then he excused himself saying he had to go – there were too many government spies around.

It is strange how, even walking around a poor area half-an-hour’s walk from the centre of Yangon, people are still able to smile.

Their homes are basic, many of them merely shacks. No running water, appalling sanitation, yet so many of them smile. “How are you?” they ask as they pass.

A group asked me to join them for a cup of tea at an outside tea shop.

Sitting on a plastic chair with a small table in front, they served me an incredibly sweet cuppa.

“Bad situation,” one of the men said in quite good English. I responded with a wordy view of my take on the situation before realising that the man’s entire English repertoire consisted of “bad situation”.

Then a monk joined us. He said he was 67-years-old and told me that the monks were down at the moment but they were not finished.

“They will lead the people again,” he told me. “Soon.”

I asked him if he was afraid but he said he was not. It would be understandable if he was.

Many feel the life of this new push for democracy hinges on the monks, whose ranks have been depleted by the arrest of thousands.

Many more have been confined to their monasteries. A few have been allowed to venture out.

Normally on Sunday monks go from house to house, collecting alms. This was the first time since the troubles 19 years ago that they have not.

But the old monk who sipped tea with me on the plastic chair also said the whole issue is not finished. It would have been rude to disagree.

As I moved to pay for the tea I discovered I was wrong about the repertoire of the man who said “bad situation”.

He could also say “me pay”  – and he did. Such genorsity from people with nothing but smiles who want nothing more than simple human rights.

But few are placing much faith in the generosity of the military rulers.

Few are putting much hope in the UN envoy’s visit. He has been before, they point out. He left empty handed and they stayed behind.

The military junta is powerful and ruthless and has shown a complete disregard for its own citizens and international opinion – two factors which may mean that this new fight for democracy may be lost.

As I walked through the slums of Yangon I could not help but remember the wedding of the daughter of the leader of Myanmar’s military junta, Than Swe.

Footage leaked onto the internet showed a ceremony that was the last word in opulence –  diamonds, champagne, over-the-top extravagance. Such a difference from the lives faced my millions in Myanmar.

The people of Yangon’s slums would not have seen the video because most do not have electricity let alone a television.

Most have not seen images of the overweight general inspecting his troops, and no one has even heard his voice.

He never speaks in public, never addresses the nation.

A man without a voice. But then again, some people ask, why does he need to speak? He has soldiers to do his talking for him.

The question is, have they finished speaking yet? 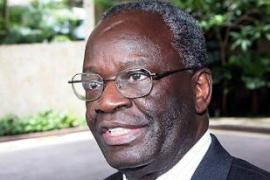