All three windowless armoured buses had originally been scheduled to leave the prison at 7:30am.
Release delayed

The Israeli cabinet approved the release of 87 Palestinian men, including two minors, a week ago but authorities announced a further delay on Monday morning.

Prisoners who had undergone final checks and were already aboard buses were led back to their prison cells.

The release was delayed “for technical reasons”, according to Yaron Zamir, Israeli prisons authority spokesman.

The majority of the men on the release roster were members of Abbas’s Fatah faction, with the rest coming from the smaller Popular Front for the Liberation of Palestine (PFLP) and the Democratic Front for the Liberation of Palestine (DFLP) groups.
The freeing of prisoners is emotionally charged for Palestinians, who see their nearly 11,000 brethren held in Israeli jails as fighters for freedom from Israeli occupation.
Groups of Palestinians were already gathering at the Erez crossing, awaiting their relatives.
“There is a mood of celebration here in Gaza,” Nour Odeh, Al Jazeera’s correspondent at the crossing, said.

“Although the number of prisoners is not very large, its always a cause for celebration.”

Many Israelis say such amnesties encourage violence by Palestinian fighters.
One prisoner scheduled to be released on Monday, said: “I hope there will be peace and quiet.”
Differing agendas
Ehud Olmert, Israel’s prime minister, said only prisoners “without blood on their hands” and willing to sign a document renouncing violence would be freed.
Olmert and Abbas are to meet on Wednesday to discuss their agendas for a US-sponsored conference on Palestinian statehood.

The talks will host Olmert and Abbas alongside other Arab leaders, but exclude Hamas.

Palestinians are divided on whether the conference will do anything to bring them closer to statehood.

Twenty-nine of the prisoners to be released come from Gaza and the others from the West Bank.

Odeh said: “As far as percentage is concerned, the number of Gaza residents that remain detained by Israeli authorities is far smaller than that of West Bank residents.”

One prisoner from the West Bank that was on the release roster for Monday was found to have changed allegiance in jail, from Fatah to the Hamas movement, and was held back, a senior security official told AFP news agency.

Palestinian prisoners to be freed are taken off buses and returned to jail cells. 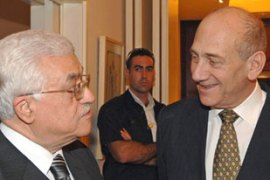 Israeli cabinet votes 16-6 to free the Fatah-affiliated prisoners this week.