Abdul Wahid Koani, mayor of the town of Joman, said the border near him at Haj Umran was also open and vehicles were crossing there.

Iran had closed the border on September 24, following the detention of Mahmoud Farhadi by US officials.

The US military claims he is an officer of the Quds force, the covert operations of Iran’s Revolutionary Guards, which is accused by the US of helping Shia militias involved in Iraq’s sectarian conflict.

However, Iran and the Kurdish regional government have said that Farhadi is a businessman who was part of a commercial delegation invited to visit Sulaimaniya.

According to Mohammed Raouf, the trade minister of Kurdistan, the closure had resulted in goods accumulating at the border, and costing the region $1m a day.

Omar Ali Arrif, a truck driver, was heading back to Iran via Bashmakh with a convoy of 13 trucks to pick up the construction materials and tiles that he supplies to 10 stores in Sulaimaniya and Arbil, the main city in Iraq’s Kurdish north.

Arrif said: “The closure of the borders for two weeks cost me more than $20,000. I have to pay for the transport vehicles and workers even if the frontier is not operational.”

Queues of trucks had formed at the border from Sunday after an announcement from Fars, Iran’s semi-official news agency, that the crossings would reopen.

But many traders had given up hope of crossing until Monday and most of the trucks had dispersed.

Meanwhile, some traders were so desperate to make up for lost time and money that they waited overnight to be the first to cross.

Ahmed Sharif, a 25-year-old truck driver who imports vegetables and fruit from Iran to Sulaimaniya, said: “I was waiting since yesterday morning to see the borders open.”

The US military says it is holding six Quds force members arrested in Iraq’s Kurdish region in the north, five of them in a raid by US forces in January on a building planned for an Iranian consulate in Arbil.

Farhadi was the sixth Iranian to be held, seized on September 20 at a hotel in Sulaimaniya.

The military says there is evidence of Iranian involvement in attacks on US soldiers and has announced the seizure of Iranian-made surface-to-air missiles being used by fighters
Source : News Agencies 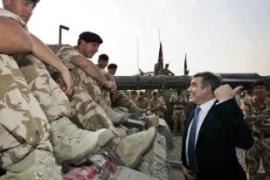 British PM says number of troops in Iraq will be halved to 2,500 from next spring. 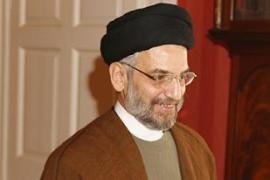 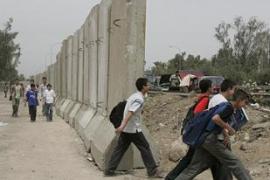 Iraqis protest against ‘US wall’

More than 1,000 Iraqis march against a wall the US is believed to be building.