In eastern India, construction of a massive steel mill is set to begin. The project has met little community resistance.

It will produce 12 million tonnes of steel a year, but will also displace hundreds of farmers and their families.

Al Jazeera’s Matt McClure travelled to Salboni and spoke to some of the farmers affected.

For these tribal farmers, growing rice and keeping a few cows is all they know and all they have ever had. And what they are about to lose.

The state government of west Bengal and one of India’s largest conglomerates, Jindal, have decided to build the mill and power plant on their farmland.

A site chosen because it is next to one of the country’s main railway lines.

For generations, industrial progress has passed this community by. Now that it’s finally arriving, people here have lots of questions, but not a lot of answers.

Nitai Mahato, 60, is selling his farm, giving up the source of his livelihood and getting $30,000 in return.

“I’ll keep the money in the bank,” he says. “They’ll give me interest. I hope I can live off that.”

But there are worries about the next generation, despite the Jindal company’s promise of one job per family.

One rice farmer, Bharat Chalak, said: “I do not know what work I can do at the steel mill. I am not educated, but my children are. One’s in primary school, one is in college, maybe one of them can get a job.”

While some here are happy now at the new-found wealth gained selling their land, critics wonder whether the community can adapt and whether it will survive. 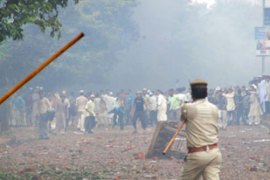