Arias, however, urged the nation to move forward. “The treaty isn’t what divides us,” he said.
“It is poverty that affects 900,000 Costa Ricans, a lack of work and violence. These are the things that separate us, and they will continue to be my priority.”
Staunch opposition

Partial results showed that with 73 per cent of votes counted, just over 50 per cent of voters said ‘yes’ to the agreement, while 47.5 said ‘no’, the supreme electoral tribunal said.

Turnout was around 60 per cent, with tens of thousands of Costa Ricans voting.

Proponents of the Central American Free Trade Agreement (Cafta) have said it will open up local markets to US products, but also boost Costa Rican exports to the US.

Several countries in the region have already accepted Cafta, but Costa Rica has faced staunch opposition to the agreement, forcing Arias to call a referendum over the issue after more than three years of domestic debate.

President Arias, a 1987 Nobel peace laureate, argued that Costa Rica needed to further open its economy as it is a small country with few natural resources.

Alfredo Volio, head of the ‘yes’ campaign, said: “We’ve decided to board the development bus.

“A beautiful page has been written in this country’s history,” he said.

‘Threat to the poor’

Critics fear the deal will lead to a flood of cheap US farm imports that will damage state-run companies and endanger funding for Costa Rica’s welfare state, which provides free education and healthcare.

The agreement will expose state-run sectors, such as telecommunications and insurance, to competition from foreign firms.

“It seriously hurts the poor and it has benefits for the wealthy class,” said 29-year-old student Luis Sanchez.

Last weekend, in the largest march in Costa Rica in recent years, around 100,000 people filled the streets of San Jose, the capital, to protest the trade pact.

However, many Costa Ricans have argued in favour of the pact, and a majority voted for its implementation.

Jose Gadea, 49, a businessman who backed the deal, said: “We can’t shut the door on the world. We have to compete, produce and sell.”

The White House has said on Saturday it would not renegotiate the deal if Costa Ricans voted against it.

But Costa Ricans remain divided over the economic future of their country – a coffee-producing nation of four million people known for its political stability in a region that was torn by civil wars in the 1980s.

Costa Rica has no army, boasts a wealth of beautiful beaches and jungles and has enjoyed almost uninterrupted democratic government for over a century.

Coffee farming, tourism, call centres and microchip manufacturing have supported the growing economy, which is more diversified than many of its neighbours, with many migrants from neighboring Nicaragua and Panama working in the country. 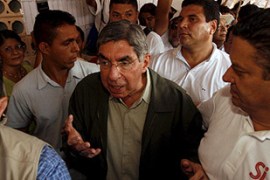