Raja Zafarul Haq, a leader of the All Parties Democratic Movement, whose politicians boycotted the vote, said: “This is the most controversial election in our 60-year history.
‘No value’

“The election has no moral or constitutional value,” he said.

Haq said leaders of the All Parties Democratic Movement would meet in the coming days to plan protests against Musharraf.

Musharraf has refused to say what he would do if the supreme court overturns the result, adding: “Let them come to their decision, then we will decide.”
Saleem Bukhari, editor of the Pakistani Daily News, said: “Only the ruling party and the alliance parties voted for him. The opposition parties stayed away.”
But Musharraf told reporters on the lawn of his official residence: “Democracy means majority, whether there is opposition or no opposition.
Sweeping victory

“A majority, a vast majority, have voted for me and therefore that result is the result.”

Musharraf must now wait at least 10 days for a supreme court ruling on the legality of his re-election, but analysts have said the court is unlikely to annul his sweeping victory.

Bukhari said: “It is very difficult to speculate what the supreme court decision will be.

“But if you look to the past, every time when a military dictator has gone to the court to seek protection, the supreme judiciary has always come out to help him, so it is expected this time that Musharraf will get the clean cheque from the supreme court.”

Hassan Askari Rizvi, a Pakistani political analyst, said: “The supreme court may be scared that the situation [in Pakistan] could go in any direction because they don’t expect Musharraf to quit.

“Nobody in Pakistan expects Musharraf to quit.”
‘Good chance’
In the two houses of parliament, Musharraf won 252 of 257 votes, and also won the most votes in three of four provincial assemblies, officials said.

About 30 per cent of national assembly opposition politicians resigned before the vote and Benazir Bhutto’s Pakistan People’s party abstained.

A rival, Wajihudduin Ahmad, a former judge who refused to swear allegiance to Musharraf after the coup that brought him to power in 1999, got two votes. Three votes were rejected.
Ahmad told Al Jazeera that there was a good chance the supreme court would not endorse Musharraf’s victory.
“We have a very strong case,” he said.
Musharraf’s total electoral college vote, including the provincial assemblies, was 384 ballots out of 702, government officials said

Musharraf has been in conflict with the supreme court since he attempted to sack Iftikhar Muhammad Chaudhry, the chief justice.

However, Ayaz Amir, a Pakistani political columnist, told Al Jazeera that Pakistanis were very cynical about the validity of the poll.
“People are taking this election with a large bucketful of salt, ” he said.

If his re-election is confirmed, the president has promised to leave his position as head of the army by November 15 and be sworn in as a civilian leader.

Opposition parties have vowed to stage protests over Musharraf’s decision not to step down from his army post ahead of the election.

But Musharraf had averted a walk-out by Bhutto’s PPP by granting her amnesty from corruption charges, paving the way for a power-sharing deal between the two politicians.

Bhutto, whose party is the country’s largest, had earlier threatened to further undermine Musharraf’s widely anticipated victory by pulling her MPs from parliament, after other opposition parties also resigned.
The amnesty clears the way for her planned homecoming on October 18 in the run-up to parliamentary elections due by early 2008.
Source: News Agencies 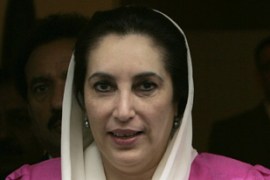 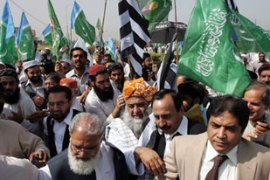 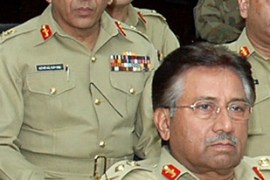