The decision, announced by a special judiciary chamber, represents a streamlining of earlier plans to submit Fujimori to six judicial proceedings after he was extradited from Chile last month.
‘Intensive work’
The process of the ordinary trial will start on October 12, when Fujimori will appear before judge Pedro Urbina, who has been looking into charges of abuse of power.
This ordinary trial, officials say, has been going on for some time, and the court just needs to hear Fujimori’s defence.

The first mega-trial will focus on accusations that the former president had a role in the deaths of 25 people as well as the kidnapping of businessman Samuel Dayer and journalist Gustavo Gorriti.

“It will be intensive work,” San Martin said, pointing out that the proceedings will be public. He said “politics will not affect the sentence.”
Fujimori was extradited last month from Chile, where he was detained in 2005 as he tried to make his way back to Peru in the hopes of making a political comeback.
Death-squad slayings
Fujimori faces up to 30 years in prison and a fine of some $33 million if convicted of the 1992 death-squad slayings of nine students and a professor at La Cantuta University, and the 1991 killings of 15 people in Lima’s Barrios Altos neighbourhood.
About 300 of Fujimori’s supporters gathered for a candle-lit vigil on Friday night at a Lima monument that honours an estimated 70,000 people who were killed in the country’s conflict with Shining Path, a Maoist group, in the 1980s and 1990s.
His supporters, their hands painted white, praised Fujimori as “yhe peacemaker” for his government’s near total defeat of the rebel group.
Source : News Agencies 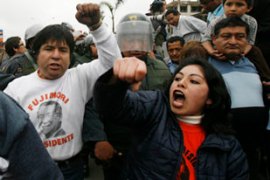 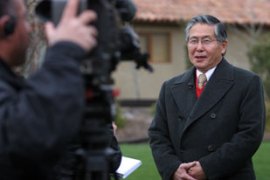 Fujimori returns to Peru for trial 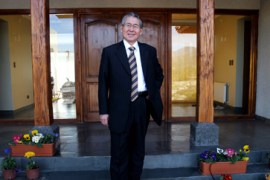