However, Ahmed Mohammed, a witness, said the death toll was higher.

“There are 24 bodies on the ground in the village and 25 others wounded in Al-Khalis hospital,” he said.

At least four houses in the village, which lies 80km north of Baghdad, were destroyed in the US air raid, witnesses said.

An Iraqi army official who spoke on condition of anonymity said civilians were killed when they rushed out to help those hurt in the initial bombing.
Oday al-Khadran, Khalis’ mayor, said the US military targeted areas built up by local people to protect their neighbourhood against attacks by al-Qaeda fighters.
“These places came under attack by American air strikes,” he said.
US statement
The US military could not be reached for comment on allegations that it had killed civilians during combat operations, but a US military statement said 25 fighters had been killed near Baquba.
The statement said US forces came under fire from opposition fighters who were then killed in an ensuing gun battle, adding that two houses were destroyed in the fighting.
The target of the operation was a “commander believed to be associated with members of the Iranian Revolutionary Guard-Quds Force”, the statement said.
The statement said that one of the oppostion fighters was carrying what appeared to be an anti-aircraft weapon.
The US military said at the weekend it had seized Iranian-made surface-to-air missiles that were being used by opposition fighters in Iraq.
Heightened tension
Friday’s incident comes amid heightened tension between the US and Iran after US forces detained Mahmudi Farhadi, an Iranian national, in northern Iraq a fortnight ago.
Farhadi’s detention led Tehran to close its border with the Kurdish semi-autonomous region.
The US military says that Farhadi is an officer in the covert operations arm of Iran’s elite Revolutionary Guards.
The secret operations wing has been accused by American commanders of supporting Shia fighters involved in Iraq’s continuing sectarian conflict.
Source : News Agencies 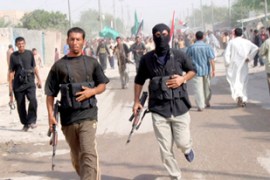 Iraq’s prime minister has held meetings with two influential Shia figures in an effort to build political consensus, while the US military has reported the deaths of 10 soldiers, bringing to 68 the number of US troops killed in Iraq this month.