Gangs were also being sent to homes to search for hiding monks, creating a climate of terror, Western diplomats said.

In one house near the Shwedagon Pagoda, the holiest shrine in devoutly Buddhist Myanmar and starting point for last week’s rallies, a 13-year-old girl said her parents had been taken in the middle of the night.
Paulo Sergio Pinheiro, the UN human rights envoy for Myanmar, said in Geneva that the number of those detained was now in the thousands.
The National League for Democracy, the party of the detained opposition leader Aung San Suu Kyi’s which won an election landslide in 1990 but was denied power by the army, said 160 of its members and other activists had been detained.

The crackdown continued after two days of relative quiet and just hours after Ibrahim Gambari, the UN special envoy on Myanmar, left the country following a meeting with the country’s leader.

Gambari spent half of his four-day stay waiting before he finally got to see Senior General Than Shwe to persuade him to halt the repression and open talks with Aung San Suu Kyi.
The envoy, who has not spoken about his meetings with Than Shwe and Aung San Suu Kyi, was due to brief Ban Ki-moon, the UN secretary-general, in New York on Thursday.
But before that, he met Lee Hsien Loong, Singapore’s prime minister, on Wednesday.
Singapore currently chairs the Association of South East Asian Nations (Asean), of which Myanmar is a member.
No Asean action
So far, Asean’s policy of non-interference and “constructive engagement” to coax Myanmar into democratic reform has worked no better than Western sanctions.
And although the group issued a rare expression of “revulsion” after last week’s violent crackdown, there has been no word on whether it will take any action against Myanmar.

The military government says it dealt with protesters, which at the height of demonstrations were estimated at more than 100,000, with “the least force possible” and said only 10 people were killed in the restoration of “normalcy”.

Dissident and human rights groups say the toll is much higher.
In Geneva on Tuesday, the UN Human Rights Council condemned the military’s “violent repression” and called on the generals to allow its investigator to visit for the first time in four years to shed light on what happened.
Source: News Agencies

Meeting comes after foreign minister tells UN “normalcy” has returned to the country. 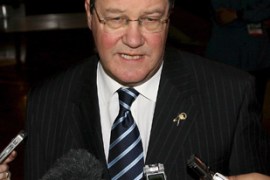 Nominee for ambassador rejected because he is a general in the military government.