It was unclear why Peres delayed the pardons but Israel’s military chief had told Ehud Olmert, the prime minister, in a personal letter that he opposed it as long as Gilad Shalit, an Israeli soldier, was held by Palestinian fighters.

The prisoners were released in an effort to bolster Mahmoud Abbas, the Palestinian president ahead of a US-sponsored conference which will discuss Palestinian statehood.

Dozens of family members and supporters, some cheering and waving yellow flags of Abbas’s secular Fatah movement, had waited for hours to greet the prisoners.

“Thank God we were released and we hope that all other prisoners from all other factions will be freed,” said Abdel-Hadi Hassanein, who was freed after serving half of his 14-year sentence for several shooting attacks against soldiers.

Hassanein’s four-year-old nephew said: “He was spared by the Jews. A kiss to Abu Mazen [Abbas], a kiss to my uncle and a kiss to Fatah.”

The crowd moved away after the shooting and continued its celebrations as the prisoners completed the crossing.

The release has stirred domestic opposition in Israel. Olmert said he agreed to release only prisoners who did not have “blood on their hands”, a reference to deadly attacks against Israelis.

The prisoners were required to renounce violence in writing as a condition for their freedom.

Meanwhile, Nour Odeh, Al Jazeera’s Gaza correspondent has said that the prisoner release was met with caution by the Palestinian public and senior officials, as it was a unilateral measure made by Israel.

Odeh said: “The Palestinian authorities had no hand in choosing who, and how many prisoners would be freed.”

Olmert and Abbas are to meet in Jerusalem on Wednesday to try to narrow differences ahead of the Middle East conference planned for mid-to-late November.

The release of prisoners is highly emotive for Palestinians, who regard the nearly 11,000 men and women held in Israeli jails as fighters against foreign occupation.

Abbas’s office had welcomed Israel’s decision to release the men but said more needed to be done.

The last such gesture by Israel was on July 20, when about 250 prisoners, most of them from Fatah, were freed. 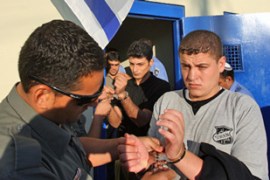 Dozens of Palestinians from the list of 256 prisoners leave for West Bank.