Speaking at the annual congress of the United Russia, he said the party would first have to win the parliamentary elections and a “decent, competent, modern person” must be elected president.

“The prime minister’s job would, of course, allow him to very closely monitor the work of government and be very close at hand to the president,” Jonah Hull, Al Jazeera’s Moscow correspondent, said.

Maiya Grishina, a member of the central elections commission, said there was nothing in Russian law that would forbid Putin from running for a seat in the legislature while remaining president.

“Under existing legislation, the president is not forbidden from putting his candidacy forward for any elections, including election of deputies to the State Duma,” she was quoted by the RIA Novosti news agency as saying.

Speculation over Putin’s future has been considerable and he recently refused to rule out a return to the presidency in 2012.

He is yet to name a potential successor but Putin’s is hugely popularity and the Kremlin’s considerable control over the country’s media leaves whoever he chooses almost certain of the presidency.

In September, he told a meeting of international affairs experts that he would “remain in some sort of role” after stepping aside in 2008.

Fred Weir, a journalist and specialist in Russian affairs told Al Jazeera that Putin’s announcement was “another step in his own personal endgame”.

“He will probably arrange for the constitution to be changed to strengthen the role of parliament, diminish the role of a president,” he said.

“And come next March, President Putin will become Prime Minister Putin but he will probably just be as powerful as ever.”

Gleb Pavlovsky, a pro-Kremlin political analyst, said the move was the first time since Boris Yeltsin challenged former Soviet leader Mikhail Gorbachev in the early 1990s that a centre of power outside the Kremlin was taking shape.

“We can forget our favorite cliche that in Russia, the president is the tsar,” Pavlovsky said after Putin’s announcement.

“It’s the most politically logical solution to the problem of what Putin does when he leaves office.”

Kasparov said he doubted that the Kremlin would allow them to participate but he would use the poll to highlight the country’s political problems.

“The parliamentary and presidential campaigns might be considered totally irrelevant, because by current laws we will not be registered in both elections,” he said.

Opinion polls fail to register any significant support for Kasparov’s movement, though two other opposition parties, Yabloko and SPS, attract between 3 to 4 per cent each.
Source : Al Jazeera, News Agencies 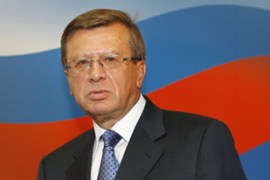 Putin does not rule out 2012 return 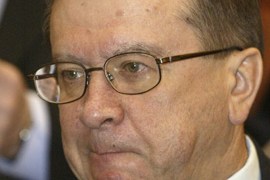