Bhutto, who has vowed to return to Pakistan on October 18 after eight years of exile, was speaking less than a week before an October 6 election that Pervez Musharraf, the current president, is expected to win despite his slumping popularity.

She has been in talks with Musharraf about a post-election power-sharing deal that would shore up his position, which has become more precarious amid violent clashes with Muslim fighters and demonstrations against his re-election bid.

In a new audio message issued less than two weeks ago, bin Laden called on Muslims in Pakistan to wage fight Musharraf’s government and his armed forces.
A string of deadly attacks has left scores of security personnel dead since government troops stormed the al-Qaeda-linked Red Mosque in Islamabad in July.
US intelligence officials believe bin Laden and other al-Qaeda leaders are being protected by tribal leaders in an area of northwestern Pakistan near the Afghanistan border that is largely inaccessible even to Pakistani forces.
Strength of evidence
Bhutto said her decision would depend on the strength of the evidence.

“I think one really needs to see the information. So I would really, really need to see the evidence,” she said, according to a transcript of the BBC interview.

“But if there was evidence, my first reference would be to go in myself and if … there was a difficulty on that I would like to co-operate with the Americans.”
Bhutto’s comments came on a day a suicide bomber disguised in a woman’s burqa blew himself up at a busy police checkpost in northwest Pakistan, killing at least 16 people, including four policemen.
The blast happened on the outskirts of Bannu, a key garrison town near Pakistan’s troubled tribal areas bordering Afghanistan, where the army is battling al-Qaeda and Taliban fighters.
Source : News Agencies 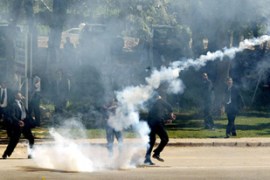 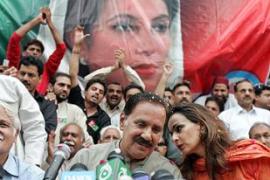 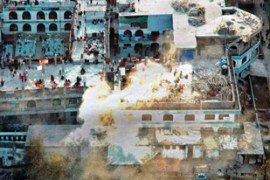 Al-Qaeda’s deputy leader calls for revenge against Musharraf for the military action.