He said government troops began shelling the area soon after the mine explosion, but a military spokesman denied any involvement in the attack, saying troops were not in the area.
Brigadier Prasad Samarasinghe said: “It is 20 to 25km inside. We don’t have anyone there. We totally deny this.”
The military said Sri Lankan warplanes destroyed another Sea Tiger base in the northern rebel-controlled Mullaittivu area in a fourth day of air strikes.
Group Captain Ajantha Silva, the air force spokesman, said the air force bombing hit the Chilawatte Tamil Tiger naval base in northeastern Mullaittivu District.
He did not know if the strike caused any damage or casualties.
“The target was a launching pad of the Sea Tigers,” Silva said, referring to the Tamil Tiger rebels’ naval wing. The Sea Tigers ensure rebel supplies reach the South Asian island via sea and occasionally launch attacks on the Sri Lankan navy.
Also on Friday, the military was searching for Tiger fighters who attacked a police post in the northern garrison town of Vavuniya, seriously wounding two policemen, Brigadier Samarasinghe said.
The policemen fired back during the Thursday night ambush, and Samarasinghe said a search was on to find any rebel casualties.
Vavuniya is the last major government-held town before Tiger territory starts. Sri Lanka has recently experienced a fresh spike of violence in the northeast.
More than 3,600 fighters and civilians were killed in renewed fighting in 2006, according to the defence ministry.
A Norwegian-brokered 2002 ceasefire has all but disintegrated, although it still officially holds. Before the ceasefire, the conflict claimed the lives of about 65,000 people and displaced another 1.6 million.
Source : News Agencies 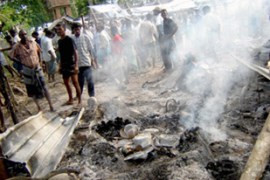