Heroic trio
It was the perfect send-off for Australia’s three retiring cricket greats, Glenn McGrath, Shane Warne and Langer.
McGrath and Warne led the Australian team from the ground to huge applause from the near-capacity Sidney crowd at the end of England’s innings to signal the end of a golden era for Australian cricket.
Warne finished his 145-Test career with 708 wickets, the most in Test cricket, and McGrath ended his 124 Tests with 563 wickets, the most by a fast bowler.
They also clocked up 1,001 wickets between them in the 104 Tests they played together.
Warne said: “To win 5-0 is a fantastic achievement by this group of guys, this team’s played some sensational cricket through the whole summer.
“England have played some good cricket at times too, but when the big moments have come the Australian team’s stood up.”
McGrath said he had never played in a better Australian side.
He said: “The bowling’s given them nothing and the batting as well. I don’t think we’ve ever played as well teamwise as we have in this series.”
Langer said the emphatic series victory was “the perfect time to let go of it” and end his Test career.
Woeful start
Any remote hopes England had of setting Australia a teasing target in the final Test fell away after a cataclysmic start to the fourth day.
The team’s remaining batting hope Kevin Pietersen was out off the third ball of the day when he was caught behind off McGrath on his overnight score of 29.
Nightwatchman Monty Panesar was run out soon after attempting England’s first run of the day.
Wicketkeeper Chris Read hit to the deadly Andrew Symonds in the covers and the crack fieldsman took aim and threw down middle stump with Panesar, slow out of the blocks, well out of his ground at the striker’s end and out for a duck.
That left England wallowing at 114 for seven, a lead of just 12 runs with three wickets left.
Sajid Mahmood edged a four through the slips cordon to give England their first runs of the day.
Read played away from his body to Brett Lee and snicked to a diving Ricky Ponting at second slip for four.
In the next over Mahmood was on his way, bowled off an inside edge for four and leave England 21 runs in front at 123 for nine.
England’s innings ended when James Anderson skied to Mike Hussey at mid-on for five to give McGrath 3-38.

Brett Lee continued his resurgence to finish with 3-39 and Warne claimed 1-23 in his final innings. 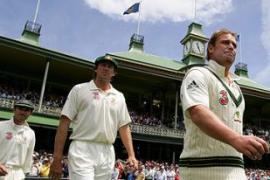 Australia in sight of 5-0 win

England stare at another defeat as Australia dominate the last and final Test. 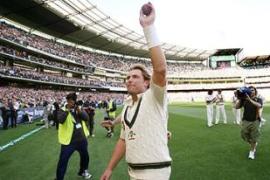 Australia win the fourth Test by an innings and 99 runs in only three days at the MCG.