No co-operation
Del Ponte said: “They have done nothing. They have done even the contrary, because we received no information, no reports, nothing … Belgrade is not co-operating with us.
“The message it would send to Belgrade if they resumed negotiations would be that the EU had decided to restart talks even though [they] have done nothing.
“I hope the EU would continue to support our needs.”
Brussels froze talks with Serbia last May on a Stabilisation and Association Agreement, a first step towards membership, after Belgrade failed to arrest Mladic, who was indicted over the massacre of about 7,000 Muslims in Srebrenica in 1995.
Several EU member states are pressing for a resumption of talks, hoping to boost pro-European forces in Belgrade and soften the blow of expected UN proposals for the eventual independence of Kosovo.
Del Ponte said this would damage chances of bringing Mladic and Radovan Karadzic, a former Bosnian Serb leader, to justice.
She said Solana had assured her of his full support when he visits Belgrade next week before EU foreign ministers discuss the issue on February 12.
Softer stance
Del Ponte said she detected a softer stance towards Serbia emerging among other countries.
Cristina Gallach, a spokeswoman for Solana, declined to say explicitly whether resumption of the talks remained conditional on full co-operation by Serbia with the Hague tribunal.
She said: “The relationship of Serbia with the EU will be evaluated and decided in the light of constructive attitudes in relation to developments in Kosovo and full co-operation with the tribunal.”
In December, Solana said the EU should review whether to resume talks with Serbia after its January 21 general election, in which the ultra-nationalist Radicals, whose leader is on trial in The Hague for war crimes, emerged as the largest party.
Despite the big vote for hardliners, pro-European forces won enough seats to govern in coalition and the likeliest outcome is an alliance of broadly pro-Western parties.
Del Ponte said the Serbian intelligence service knew the whereabouts of Mladic and if Vojislav Kostunica, the Serbian prime minister, ordered his arrest, he could be delivered to The Hague the same day.
She said Belgrade seemed to be banking on a UN deadline for the tribunal to complete trials by 2008 and close by 2010.
Source : News Agencies 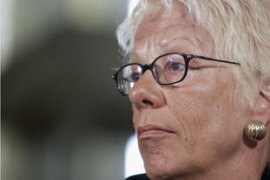 Carla Del Ponte hopes Bosnian Serb fugitives will be arrested before she steps down. 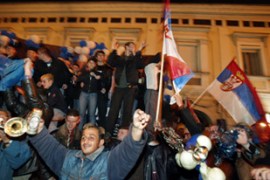 Nationalists hold the most parliamentary seats but not enough for a majority. 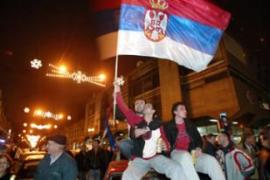 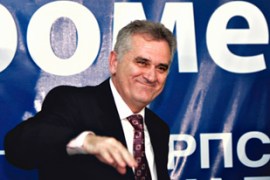