The Swiss lawyer has said she will urge the European Union to keep up its pressure on Serbia to co-operate with the tribunal but has expressed fears that some countries are softening their stance on making the handover of Karadzic and Mladic a condition of entry talks.

“Now the situation is sensitive and delicate because some European Union states … they think ‘poor Serbia’,” she said.

The European Commission decided to freeze talks with Serbia in May last year after Belgrade failed to keep a promise to arrest Mladic, but Del Ponte said Italy, Austria and Spain were considering restarting negotiations.

“I will try to underline the importance of the support of the European Union to obtaining Mladic and Karadzic,” she said, adding Germany, France, the Netherlands and Britain still supported the suspension of membership talks.

The chief prosecutor has repeatedly said that she believes Serbian authorities know Mladic’s whereabouts and could arrest him at any time.

“Mladic is within reach. I believe the intelligence services know where he is,” she said. “If Prime Minister Kostunica would give the order to arrest him now I could have him this evening in The Hague.”

The UN Security Council has instructed the tribunal to finish its trials by 2008 and conclude the appeals process within another two years, before closing down.

If the court no longer exists its arrest warrants against Karadzic and Mladic will become invalid, Del Ponte said on Tuesday.

She expressed deep disappointment about the death of Slobodan Milosevic, the former Yugoslav president, just months before his war crimes trial had been due to conclude but said the tribunal had achieved a lot.

“If you look at what we have done, it is an historical achievement,” Del Ponte said. 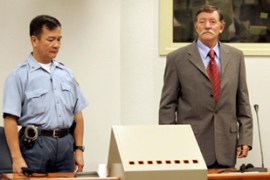 Serb chief on trial over Sarajevo 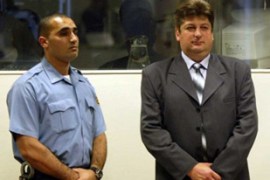 The men are charged with crimes against humanity for killings and rapes at two camps.