The US president on Monday accused Hezbollah and its allies Iran and Syria of stirring up the latest violence in Lebanon in a bid to topple its government and said “those responsible for creating chaos must be called to account”.
Thousands gather
Nasrallah said: “The one who must be punished, who must be tried, is the one who ordered the launching of war on Lebanon.”
The July-August war killed nearly 1,200 people in Lebanon, mainly civilians, and 157 Israelis, mostly soldiers.

He made his address to thousands of Shia muslims who converged on Beirut’s southern suburbs to commemorate the killing in battle of Imam Hussein, the Prophet Mohammad’s grandson, in AD 680.
Earlier, the crowd marched in Hezbollah’s Beirut stronghold, rhythmically beating their chests in a sign of grief over Hussein’s martyrdom and chanting “Death to America, death to Israel”.
Some carried red, yellow and black flags with religious slogans. Others wore green headbands and chanted, “We will never be humiliated.”
“George Bush knows … and we reiterate to him and the whole world should hear that we are a nation that doesn’t succumb and can’t be humiliated, ” Nasrallah said.
Sectarian clashes in Beirut last week between pro- and anti-government supporters left seven people dead.
Oppositon supporters, led by Hezbollah, are calling for a veto in cabinet and for fresh elections and have launched a series of protests, sit-ins and a one-day strike.
Source: News Agencies 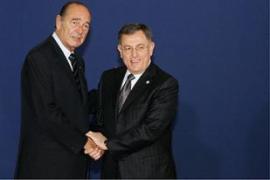 Billions pledged in aid to Lebanon 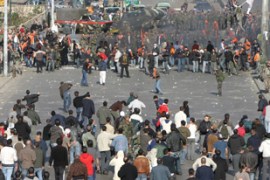 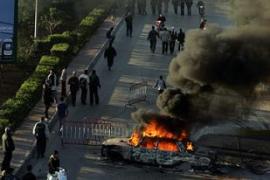 Streets return to calm after day of strikes led to deaths and violent clashes.