Avigdor Lieberman, Israel’s strategic affairs minister and Yisrael Beitenu leader, was the only cabinet minister to vote against Magadla’s appointment in a separate government ballot on Sunday.

‘Promoting dialogue’
Magadla, a long-time union leader from the centre-left Labour party, has said his appointment is a historic step forward for relations between Jews and the minority Arab and Muslim communities in Israel.

Magadla told the Associated Press that his goals as a cabinet minister would be “promoting co-existence between the two peoples inside the state, and promoting dialogue between the Palestinians and the Israelis toward negotiations and political agreement”.

Magadla and sources close to Ehud Olmert, the Israeli prime minister, have said the two agreed he would be assigned a portfolio within weeks, possibly as head of a newly-created ministry of science, culture and sport.

Miri Eisin, a spokeswoman for Olmert said: “The present government is proud to be the first government to give executive representation to the Arab Muslim minority.”

Israeli Arabs, who make up 20 percent of Israel‘s population, are descendants of the 160,000 or so Palestinians who stayed behind when the state of Israel was declared in 1948 and who did not join the refugee exodus.

Arab-led parties account for 10 of the seats in the 120-member parliament.

However, the country has had only one Arab cabinet minister before: Salah Tarif, a Druze, who was appointed in 2001 and forced to resign nine months later under a cloud of corruption allegations.

This appointment was more contentious because Muslim and Christian Arabs, unlike the Druze, do not serve in the army.

Arabs have been slowly taking on a more visible role in Israeli society. There is an Arab supreme court justice, as well as several diplomats and senior civil servants.

But Arabs lag behind Israel‘s Jewish population in income, education and standard of living, and have long lacked representation in government commensurate with their numbers.

Wasil Taha, a legislator from the Arab Balad party, said there was little chance Magadla would be able to have a positive effect by working inside the government.

Taha said: “Progress for Israel‘s Arabs depends on changing the entire discriminatory approach of the government over the past 58 years, and not on the appointment of a minister or deputy minister.” 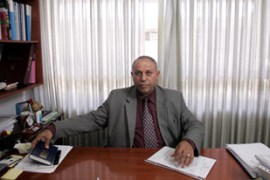