The GSPC, a strong opponent of Algeria‘s secular government, said it was adopting the name al-Qaeda organisation in the Islamic Maghreb.

“We had wished to do this from the first day we joined [al-Qaeda] but we wanted the permission of Sheikh Osama, may God protect him. This obstacle has now been removed,” the statement, which was signed by the GSPC and dated January 24, said.

The authenticity of the statement could not be verified, but it was posted on a website used by Islamic groups.

The group, which announced in September it had joined al-Qaeda, said in the statement that the change of name was proof of “the sincerity of the ties between the mujahideen in Algeria and the rest of their brothers in al-Qaeda.”

Some security analysts believe the GSPC is trying to transform itself from a domestic movement in Algeria, where it has been largely contained, into an international fighting force capable of striking in both North Africa and Europe.

The United States has long been concerned about the GSPC and is working with Algeria and its neighbours to combat the perceived threat through a programme called the Trans-Sahara Counter-Terrorism Partnership, worth an estimated $600mn over the next five to seven years.

France, the former colonial power in Algeria and a target of Algerian Islamic groups’ attacks in the 1990s, is also worried about any expansion of the GSPC’s activity and ambitions.

The group conducted several attacks in Algeria late last year, including the bombing of a bus carrying foreign oil workers on December 10. Two people were killed in the attack, the first on expatriates in Algeria for years.

The government said this month that GSPC members were carrying details of foreign diplomats and embassies.

Internal fighting in Algeria began in 1992 when authorities cancelled elections an Islamist party was expected to win.

Now mainly led by the GSPC, the Islamic fighter movement is estimated to have about 500 fighters compared to 30,000 in the 1990s.

It operates usually in remote mountains and parts of the vast southern desert, and is involved in drug trafficking, kidnapping and extortion. 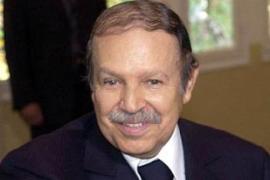 Video posted on Islamist website says US and French interests will be targeted.

At least one person was killed and 14 wounded when vehicles packed with explosives blew up outside two police stations in Algeria.