Airport blocked
Dozens of protesters blocked off the only road leading to Beirut’s international airport at the start of the stoppage – which began at 04:00 GMT.

Several Arab and international airlines suspended flights to Beirut, and shops and businesses in the capital remained closed.

The army deployed armoured vehicles at major crossroads along with hundreds of soldiers.
Lebanese security forces struggled to open blocked roads obstructed by protesters.
“Siniora out, down with the government,” Hezbollah followers chanted as they lit tyres in central Beirut, close to the prime minister’s office.
Hassan Fadlallah, a Hezbollah MP, told Al Jazeera that the government was to blame for the protests.
“These people had to do this to make their voice reach the government. What would the people do when the government becomes a dictatorial one?,” he said.
‘Coup d’etat’
The opposition, led by the Shia group Hezbollah, is calling for veto power in the cabinet and new elections to be held.
The Western-backed government of Fouad Siniora, the prime minister, has shrugged off the demands.
Instead, it is preparing for an international aid conference in Paris on Thursday that it hopes will yield billions of dollars for Lebanon’s economy, but has been criticised by the oppostion for increasing the country’s debt problems.

Ahmad Fatfat, the Lebanese minister of Youth and Sports told Al Jazeera that the strike was an “aggression against the Lebanese people”.

Samir Geagea, head of the Christian Lebanese Forces, and an opponent of the strike, said the protests had nothing to do with democracy or freedom.
“This has been transformed into a coup d’etat. It is a revolt in every sense of the word,”  he said.
Talking peace
Speaking late on Monday, Sayyed Hassan Nasrallah, the Hezbollah leader, called on Lebanese to observe the strike.
He said some ruling politicians wanted violence in Lebanon, which is still rebuilding from its 1975-1990 civil war.
“We will move and if you want to kill us in the street, kill us,” Nasrallah said.
“We will not draw our weapons against you.”
Source: News Agencies 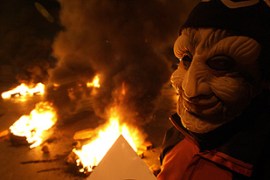 Flights suspended and roads blocked by protesters amid one-day stoppage.

Day of violence during opposition-led strike leaves over 100 injured.