Only one banner, reading “We are all Hrants, we are all Armenians,” is to be allowed.
Reconciliation
Muammer Guler, Istanbul’s governor, said: “We have cancelled all leave for police officers and we will have an adequate force in place.”
The 52-year-old journalist was a critic of Turkey’s official line on the 1915-17 Ottoman Empire massacre of Armenians, which he labelled as genocide.
He was given a suspended six-month jail sentence last year for “insulting Turkishness”.
In a sign of reconciliation between rivals Turkey and Armenia, Arman Kirakosian, Armenia’s deputy foreign minister, was expected to attend the funeral, national television in the former Soviet republic reported.
He was to make the trip despite the absence of diplomatic relations between the two countries.
A Turkish diplomat said that Ankara had invited prominent Armenian religious leaders from around the world to attend.
Investigation continues
Earlier, Archbishop Khajag Barsamian, primate of the Eastern diocese of the Armenian Church of America, arrived in Istanbul, the Anatolia news agency reported.
The Co-ordination Council of Armenian Organisations in France said they were also sending a delegation.
Aykut Cengiz Engin, Istanbul’s chief prosecutor, has said that investigators have found no link between Friday’s murder and “known ideological or separatist” illegal organisations, but added: “… we are investigating in detail the possibility that it was carried out by an organisation”.

Prosecutors say that the prime suspect, 17-year-old Ogun Samast, has confessed to the killing and newspapers quoted the teenager as telling police that he shot Dink because the journalist insulted the Turkish nation.

Quoting sources close to the investigation, newspapers have said police are investigating links between Samast and a small, ultra-nationalist group in his hometown of Trabzon on the Black Sea Coast.
“Ultranationalist” link
Samast told police he was told to kill Dink and provided with a gun by a friend, Yasin Hayal, who spent 11 months in jail for a 2004 bomb attack against a McDonald’s restaurant in Trabzon, the Hurriyet newspaper said.

Turkish newspapers described Hayal, who is one of the seven other people in custody, as an “older brother” figure who frequently met youngsters in the area and influenced them with his ultranationalist views.

Hurriyet said Samast, an unemployed secondary school graduate, was among 10 youths aged 15 to 17 whom Hayal had last year trained to shoot small arms in order to assassinate Dink.
“I was chosen because I was the best shot and the fastest runner,” the daily Vatan quoted Samast as telling police. His mother, Havva Samast, said on Monday that she believed her son had not been acting alone.
“He is not a person who could do this on his own,” she said in remarks broadcast on the NTV news channel. “Someone used him.”
Dozens of Armenian nationalists brandishing slogans decrying “the continuing genocide” rallied on Monday in Yerevan to denounce the Dink murder.
The protesters, rallied by the youth movement of the nationalist party Dashnak Tsutyun, marched to the European Union’s mission in the commercial hub of the country’s capital, many adorned with black ribbons and Dink’s photos.
“This crime was motivated by racial hatred which must disgust the civilised world, including the EU which must punish the organisers of this terrorist act,” they said in a declaration.
Source: News Agencies 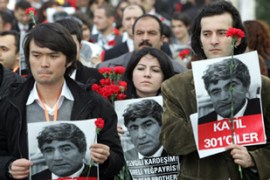 “No regrets” for death of editor in Turkey genocide row. 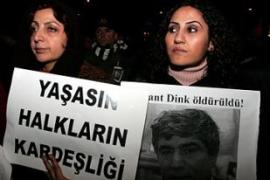 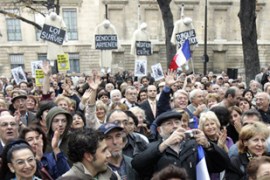