Beijing has been locked in a half-century-long dispute with the Vatican and the diplomatic initiative comes as China is experiencing a religious boom.
At the core of the dispute is the procedure for the appointment of bishops. Roman Catholic Church tradition invests the pope with the authority to name bishops, but China has refused to recognise the Vatican’s authority and has been known to appoint bishops without the Vatican’s approval.
The Vatican’s relationship with Taiwan has also strained relations; China refuses to enter into diplomatic relations with any nation that maintains official ties with Taiwan.
The Vatican’s efforts to normalise relations with Beijing – “for the good of the Chinese people and for peace in the world”, according to a statement by the Holy See – is not likely to see China budge from its demands.
“The Chinese government has two conditions on establishing relations with the Vatican,” Liu was quoted as saying on Sunday.
“The first is that the Vatican must severe all relations with Taiwan and the second is that the Vatican must commit to not interfere in China’s internal affairs.”
Diplomatic ties between China and the Vatican have been severed since 1951, two years after Beijing’s officially atheist communist government took power.
Many clergy and ordinary Roman Catholics in China remain loyal to the pope and have been persecuted for it.
Source: News Agencies 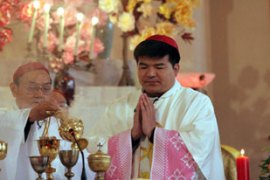 Vatican ‘will not abandon Taiwan’

Holy See wants to resume relations with China, but not at Taipei’s expense.