“[Syrian] President Assad affirmed that Syria will exert all its efforts to help the process of national reconciliation and spread the suitable political and media climate to achieve this noble goal,” the statement said.

Syria’s offer of assistance comes in spite of its opposition to the US-led invasion of Iraq, which removed Saddam Hussein, the Iraqi president, from power in 2003 and ushered in sectarian conflict.

Talabani left Syria earlier on Saturday after a six-day visit aimed at securing increased backing for the Iraqi government and closer security and economic cooperation with Syria.

Syria has adopted a friendlier tone to the Shia-led government in Baghdad, after US pressure to stop what Washington describes as a flow of insurgents and weapons across Syria’s border with Iraq.

Damascus has links to a number of political forces in Iraq, including former members of the Baath, Saddam’s party prior to his removal from power.

Syria has stopped calling for an immediate US troop withdrawal from Iraq and signed an accord in November which accepted that US forces should stay as long as the Iraqi government needed them.

Saturday’s statement said Iraq had to rebuild its army and disband sectarian militia before the foreign military presence in the country could end.

“Syria‘s readiness to stand with the brothers in Iraq is driven by the conviction that the security situation in one country affects the other,” the communique said.

Last month Iraq and Syria re-established diplomatic ties which ruptured during the 1980s when Syria sided with Iran during its 1980-88 war with Iraq.

Damascus has also strengthened its links with Shia-led Iran, which supports major figures in the Iraqi government. 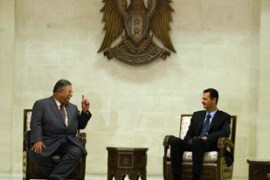 The meeting was the first between Iraqi and Syrian leaders for nearly 25 years.

First meeting between Iraqi and Syrian leaders for nearly 25 years. 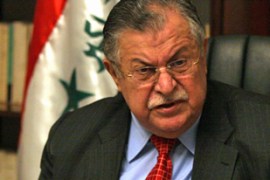 First meeting between Iraqi and Syrian leaders for nearly 25 years.