A poll released this week by the Pew Research Centre said 61 per cent of US citizens opposed Bush’s plan, while 31 per cent were in favour.

Joseph Biden, a Democratic co-sponsor of the resolution, said: “I believe that when a president goes way off course on something as important as Iraq, the single most effective way to get him to change course is to demonstrate that his policy has waning or no support from both parties.”

The resolution was drafted by Biden, who is also the chairman of the Senate Foreign Relations Committee; Carl Levin, a Democrat, who is the Armed Services Committee chairman; and Chuck Hagel, a long-time Republican war critic.

Hagel said: “I will do everything I can to stop the president’s policy as he outlined it on Wednesday night. I think it is dangerously irresponsible.”

Hagel denied that the sponsors were defeatist, were trying to assign blame to Bush, or had political motives, even though he and Biden are expected to run for president.

He said: “No one wants to see this country humiliated, defeated, or in any way lose its purpose. 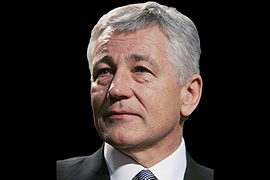 Hagel, a Republican, said the resolution’s
sponsors were not being defeatist [AP]

“There is no moral high ground that one group of senators has over the others.”

Hillary Clinton, a potential Democratic presidential candidate, said the US should cut funds for protecting Iraq‘s government leaders and equipping its military if the country’s Shia leaders fail to give Sunnis a greater role in government.

The New York senator said she opposed sending more troops to Iraq, in part because it would siphon off US military strength in Afghanistan.

By contrast, the White House is busy trying to rally support for the new Iraq plan.
Bush will try to persuade Republicans to stick with his strategy.
The White House says a resolution could send a signal to the world that the US is divided on the war.
Counter-resolution
Some senators who visited the White House and met Stephen Hadley, the national security adviser, on Wednesday said they may come up with their own counter-resolution supporting the president’s plan.
Tony Snow, the White House spokesman, said: “The president has obligations as a commander in chief. And he will go ahead and execute them.”

Bush has said he will not be swayed by Congress or public criticism.

“I made my decision and we’re going forward,” Bush told CBS’s 60 Minutes in an interview broadcast on Sunday.

Dr Khalil Jahshan, president of the National Association of Arab Americans and a university professor of international affairs, told Al Jazeera: “There is no doubt that the steps taken by the House and Senate Democrats will embarrass the US administration and step up criticism of Congress and the public opinion over Bush’s new Iraq strategy.

“It is clear that Americans oppose this policy and Bush’s stubbornness and sticking to his opinion is the biggest challenge to the public opinion since Vietnam‘s War.”