Esperon said he expected DNA results confirming Sulaiman’s death within the week.
He said a separatist informant and one of the wives of the slain man identified his body after the clash.
Kidnappings
Sulaiman, also known as Jainal Antel Sali Jr, is among five leaders of the Abu Sayyaf wanted by the United States for the kidnapping of three of its citizens and 17 Filipino tourists from the Dos Palmas resort on Palawan island in May 2001.

Sulaiman is also believed to have been involved in the bombing of a passenger ferry off Manila Bay in 2004 that killed at least 200 people.

Abu Sayyaf has been linked to the Jemaah Islamiyah group, which is allegedly fighting for a pan-Asian Islamic state and has been blamed for several high-profile attacks, including the 2002 Bali nightclub bombings.
Two Indonesians suspected of carrying out the 2002 Bali attacks are suspected to be also in hiding at Abu Sayyaf camps on Jolo, Philippine officials say.
At least 7,000 Philippine soldiers assisted by US military advisers are in the area hunting members of the Abu Sayyaf.
A major offensive against the group was launched last August and officials say 80 of the 400 or so Abu Sayyaf fighters thought to be based on Jolo have since been killed.
According to the military one of those killed may be Khaddafy Janjalani, the suspected head of the Abu Sayyaf.
Tissue from what is thought to have been his decomposing body was sent for forensic tests in December, but results have yet to be released.
In other security operations in the country, Kule Mamagong, a key bombing suspect in a series of bombings that killed eight people and wounded dozens last year was arrested in Cotabato province on Saturday, officials said.

Chief Superintendent Joel Goltiao said he was a local member of Jemaah Islamiyah.

Mamagong was also identified as a commander of the separatist Moro Islamic Liberation Front, another separatist group, which has signed a ceasefire agreement and is involved in peace negotiations with the government.

Two other suspected bombers were killed while trying to escape during a sting operation in a town near Sultan Kudarat province in southern Philippines.

Major Ernesto Torres, an army spokesman, said on Wednesday the pair was allegedly involved in a bombing at a mall, which wounded four people, in a bid to extort money from businessmen in late December. 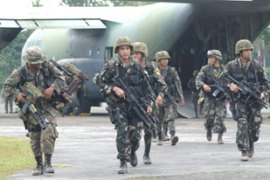 Philippines military recovers the body of a man thought to be Khaddafy Janjalani.