Batrawi also said that Abbas is seeking other tangible results from any talks, saying: “We have seen no prisoner release, nor any money paid from Palestinian revenues withheld by Israel.”

It is also believed that Abbas will seek to pressure the US to ask Ehud Olmert, the Israeli prime minister, to remove roadblocks in the occupied West Bank.

Palestinian officials said Abbas wanted to hear what Rice had to say, but they reiterated Abbas’s opposition to any suggestion of creating a Palestinian state with temporary borders.

“We want this to be the beginning of the endgame. It’s high time the peace process was revived in order to implement negotiations on final status issues,” said Saeb Erekat, a senior aide to Abbas.

The US supports Abbas against the ruling Hamas party, and plans to donate $86 million to train and equip Abbas’s presidential guard.

The talks with Abbas follow Rice’s meeting with Israeli ministers on Saturday.

Israeli officials said Livni and Rice had discussed the possibility of creating a Palestinian state with temporary borders following the line of the barrier Israel is building in and around the occupied West Bank.

However, Palestinians fear such borders would become final, leaving them with a smaller state.

However, he said the Palestinians needed to see a timetable for negotiations to reach an agreed settlement.

“If the Palestinian people aren’t hopeful of obtaining their own state … then we cannot defeat Hamas,” said Sneh, a senior member of Israel’s Labour party.

Hamas took office in March 2006 after defeating Abbas’s Fatah movement in elections. A power struggle has since followed.

At least 30 Palestinians have been killed in factional fighting since Abbas called last month for early elections. Hamas has since said talks on a unity cabinet had resumed.

Following the talks with Abbas, Rice will meet Ehud Olmert, the Israeli prime minister, on Monday.

She will also seek Arab help to stabilise Iraq during a Middle East trip that will include stops in Jordan, Egypt, Saudi Arabia and Kuwait. 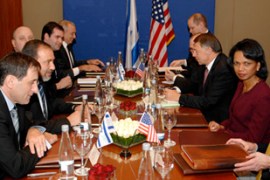 US secretary of state holds talks with Israel’s foreign minister on the first leg of her Middle East tour. 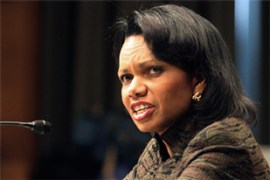 US secretary of state to meet Israeli and Arab leaders in bid to revive peace process.