She will then travel to Egypt, Jordan, Saudi Arabia, Kuwait, Germany and Britain before returning to Washington on January 19.

The visit to Kuwait will include a meeting with foreign ministers from the Gulf states of Saudi Arabia, Kuwait, the United Arab Emirates, Oman, Qatar and Bahrain, as well as Egypt and Jordan.

The trip comes two days after George Bush, the US president, presented his latest strategy for Iraq that includes the deployment of an additional 21,500 American troops.

Before her departure, Rice told US congress legislators that her trip “will focus heavily on rallying the support of those responsible Arab states to support the government of Iraq, to support what needs to be done there, to support, of course, also Lebanon and the moderate Palestinians”.

In an interview with the BBC’s Arabic television released on Friday, Rice said it was ultimately up to the Iraqi leadership to restore security.

Bush’s plan “very much puts Iraqis at the centre of responsibility for dealing with what is their most urgent problem,” she said.

“Their most urgent problem is that the population has lost confidence that the government of Iraq can and will defend them in an even-handed fashion, whether they are Sunni or Shia.”

On Friday The New York Times reported, citing Rice, that the recent US raids against Iranian interests in Iraq were conducted under an order from Bush.

Rice said Bush had acted “after a period of time in which we saw increasing activity” among Iranians in Iraq, “and increasing lethality in what they were producing”.

She was referring to what US military officials say is evidence that many of the most sophisticated improvised explosive devices being used against American troops were made in Iran, the newspaper said.

Rice was vague as to when Bush issued the order, but said his decision grew out of questions that the president and members of his national security council raised in autumn.
Administration officials now describe Iran as the single greatest threat the US faces in the Middle East, though some administration critics regard the talk about Iran as a diversion intended to shift attention away from the constant violence in Iraq.

On Thursday the US said that two aircraft carrier battle groups would stay in the Gulf for several months.

It was the first time Washington had moved two carriers to the region since 2003 when the US invaded Iraq, a US military official said. 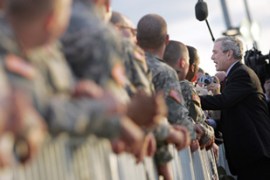 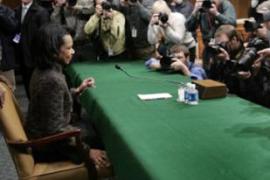 US secretary of state says the Iraq government must get better organised. 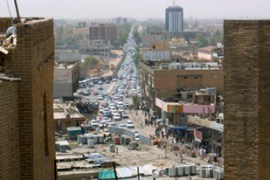 US storms ‘Iran consulate’ in Arbil

US says six people were arrested near Arbil but an Iranian consulate was not raided.