Charles Ries, the US ambassador, called the attack “very serious” and said no warning had been given.

Speaking outside the embassy, Ries said: “There can be no justification for such a senseless act of violence. The good news is no one was hurt and [there was] minimal damage.”

Greek authorities blamed domestic militant groups that have carried out a spate of bombings against police and government buildings despite a crackdown on terrorism before the Athens Olympics in 2004.

Vyron Polydoras, the minister of public order, said: “It is very likely that this is the work of a domestic group. We believe this effort to revive terrorism is deplorable and will not succeed.”

The government said it was seeking permission from the courts to view traffic camera footage, officially excluded from the police investigation under strict Greek privacy laws.

Local residents called in to state television saying they had felt the explosion.

Dozens of police cars surrounded the embassy and police cordoned off all roads in the area.

Public opposition to US policies – and the invasion of Iraq in particular – has remained strong in Greece where Washington provided support for a 1967-74 military dictatorship.

In November last year, Greek riot police fired tear gas to disperse demonstrators marching to the US embassy in Athens who chanted slogans including “Bush the butcher, out of Iraq” and “The USA is the real terrorist”.

Friday’s attack resembled methods used by members of the left-wing group November 17 who had eluded police since 1975 until their eventual capture and then conviction in 2003.

A special court gave multiple life sentences to the group’s leader, chief assassin and three other members. Lesser sentences were given to 10 others.

The group is believed to have killed US and other foreign diplomats in Greece.

“November 17 was responsible for 20 murders, including those of several American officials. This was an act of powerful symbolism.”

Government and opposition party officials strongly condemned the attack, the third against the US embassy since the mid-1970s. 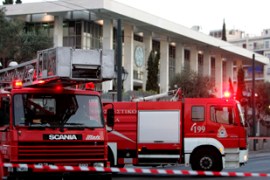 Rocket hits US embassy in Athens

No injuries are reported as Greek police say attackers fired rocket at US embassy.