Ceremony
The new members of the caretaker government’s advisory council took the oath on Saturday at the presidential palace in Dhaka.
The audience comprised political leaders, diplomats and armed forces representatives.
At the same time, the Awami League-led multi-party alliance called off plans for new blockades and strikes after its demand for the cancellation of elections due later in January was met.
New president
Fakhruddin Ahmed, a former World Bank official who has also served as governor of Bangladesh central bank, was sworn into office as head of the caretaker government on Friday.

Iajuddin Ahmed, the president, resigned on Thursday as head of the caretaker government in charge of holding parliamentary elections on January 22.

The authorities had earlier lifted a curfew imposed two days ago as part of the emergency but the capital Dhaka‘s streets remained almost deserted.

The business community welcomed the state of emergency as a possible end to the disruption that has affected Bangladesh recently.

“Over the past six months, political instability has cost us millions of dollars in export orders. Our exports were on the brink of disaster,” said Fazlul Haque, the president of the country’s biggest export group.

No comments
The country’s two main political leaders made no comment about Fakhruddin Ahmed’s appointment, but one of them – the Awami League’s Sheikh Hasina Wajed, a former prime minister – attended the swearing-in.

“Political animosity, mistrust and violence have made life miserable for the people and made the future of democracy uncertain,” Iajuddin Ahmed said in a televised address late on Thursday.

Government officials said privately that it could take months before a new ballot took place.

On Thursday, the UN announced it would suspend all technical support for the elections while the European Commission suspended its observation mission to the polls due on January 22.

At least 45 people have been killed and hundreds injured in violence since Begum Khaleda Zia of the Bangladesh Nationalist Party stepped down as prime minister in October at the end of her five-year term, handing power to the interim authority which was charged with organising polls.

Before the president announced on Thursday his resignation as head of the caretaker government, Ban Ki-moon, the UN secretary-general, said the situation had deteriorated to the point that the US-based National Democratic Institute for International Affairs and the International Republican Institute were refusing to monitor the elections. 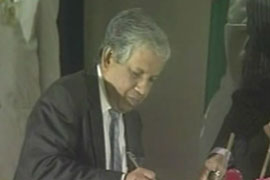 “The political crisis in Bangladesh has severely jeopardised the legitimacy of the electoral process,” he said in a statement released on Thursday in Dhaka.

“The United Nations has had to suspend all technical support to the electoral process, including by closing its International Coordination Office for Election Observers in Dhaka.”

Technical support includes consulting and advice on publishing results as well as ballot casting and counting. 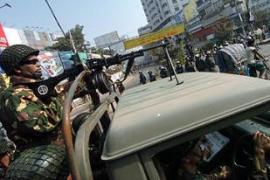 Opposition activists clash with police and bring transport to a standstill. 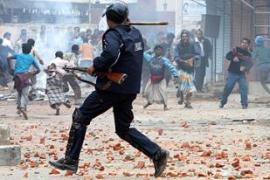 Many hurt in Bangladesh violence