None of the nine other countries that joined the European Union with Slovenia in May 2004 are likely to adopt the euro before 2009.

Nina Peskar, 20, a student from Ljubljana, summed up the mixed feelings of many Slovenians about the new currency.

“I look forward to the euro because it will make travel abroad easier, but at the same time I’m afraid prices might go up,” she said while celebrating on the capital’s packed main square, lit by a laser sign beaming: “The Euro is Coming.”

Half of all cash machines across the country, which had stopped working three hours before midnight, were operating by one in the morning and all credit card terminals were also back in business after being switched off an hour before the new year to allow time for the switch to the new currency.

Slavko Cimpric, of Slovenia‘s Bank Association, said: “Things are going even better than we expected as more cash machines are operating now than planned for this hour.”

If the transition goes smoothly, most cash machines will be operational by 6am (05:00 GMT).

Mitja Gaspari, the Central Bank governor, who steered Slovenia‘s efforts to meet euro criteria for the past six years, exchanged tolars into euros at the central bank shortly after midnight, surrounded by his deputies who toasted the euro with champagne.

“This is the first year with the euro in Slovenia and I wish the euro good luck for many years to come,” said Gaspari, who will now be a member of the European Central Bank’s Governing Council.

“I am happy although there is some nostalgia for the tolar. But this is a great opportunity for our country and we can be proud that we belong to this exclusive club,” said Bajuk.

He said his biggest fear now was that prices would rise because of the euro. A recent opinion poll showed about 40 per cent of Slovenians share this fear, despite government efforts to prevent this by introducing double pricing.

“But I am sure that our citizens are well informed and will use the power they have by not buying items that get too expensive,” he said. 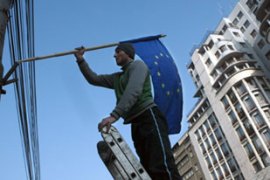 Revellers in Bulgaria and Romania sing and dance their way into the European Union.