Previous attempts to try Suharto on criminal charges have failed because of his poor health.

Now aged 86, Indonesia’s former strongman has lived an isolated life ever since he was forced out of power in 1998.

Detested by many for his authoritarian rule and alleged corruption while in office, he has managed to evade legal prosecution until now.

The group Transparency International has ranked Suharto as the world’s most corrupt leader, alleging he embezzled $15-35bn.

The United Nations has also put him on top of their most wanted list of corrupt statesmen.

But when Time magazine wrote in 1999 that the Suharto family had amassed some $15bn during their 32 years in power, Suharto immediately sued the magazine for defamation.

It was one of the last times he spoke in public, and earlier this month Indonesia‘s supreme court ruled in his favour – ordering Time to pay $106m for destroying the good name of the former president.

Ironically, while Suharto won the case against Time, he is now being sued by a lower court for massive corruption.

But al Jazeera’s Jakarta correspondent, Step Vaessen, says that despite public pressure, Suharto himself will not appear in court.

People who have met the former leader say he is suffering from dementia and that he can hardly communicate after a few strokes.

His doctors say he is too ill to stand trial and as a result Indonesian authorities have decided to drop criminal charges against the former president, meaning he will never see the inside of a prison. 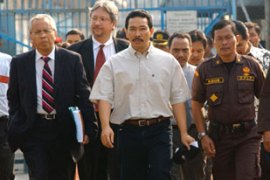 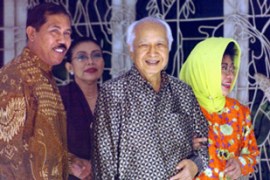 The youngest son of former Indonesian president Suharto has left his Jakarta prison, beginning a legal process that will see him freed. 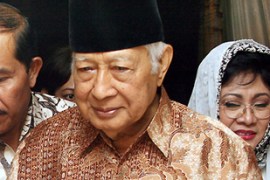