Chanting “Go Musharraf, go” the lawyers tried to approach the commission building, but riot police with shields and helmets blocked their way and scuffles broke out.

Police fired tear gas shells and beat the protesters, with at least one officer using a tree branch.

Television footage also showed police arresting female supporters from the party of Benazir Bhutto, the former prime minister, and shoving them into a waiting van.
Aitzaz Ahsan, the main lawyer representing Pakistan’s Chief Justice Iftikhar Muhammad Chaudhry during his battle against Musharraf’s attempts to sack him earlier this year, said he was among those beaten.
“The brutality of General Musharraf is being seen worldwide. Only the blind governments of the United States and Britain cannot see it,” Ahsan said.

Protesters pulled Tariq Azeem, the deputy information minister, from a car as he tried to leave the commission and hit him several times, before police stepped in and whisked him away.

“There is a ban on gatherings of five or more people in the capital territory and we are not going to allow anyone flout this law,” a senior Islamabad police official said.

Police and protesters also clashed in the cities of Karachi and Lahore.

Likely victory
Tayyab Siddiquie, a political analyst, told Al Jazeera that Musharraf could be confident of victory in the forthcoming poll.
“The president is on strong ground as he has eight years of achievements to talk about.”
On Friday, Pakistan’s supreme court dismissed opposition challenges to Musharraf’s right to contest the controversial election while he remains head of the military.
Musharraf filed his nomination papers for the elections on Thursday and is likely to win, given that the election involves the national and provincial parliaments, in which his allies hold a majority.
Opposition parties say they will resign their seats before the presidential vote on October 6, even though Musharraf has vowed to quit the army, his main source of power, after winning another term.
Source: News Agencies 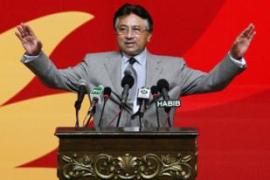 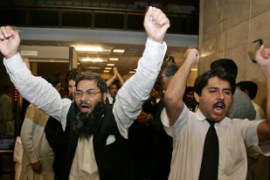