The parliament said the two organisations were terrorists for a number of reasons.

It said they were involved in dropping nuclear bombs in Japan in World War II and used depleted uranium munitions in the Balkans, Afghanistan and Iraq.

It also said they supported the killings of Palestinians by Israel, bombed and killed Iraqi civilians and tortured terror suspects in prisons.

The resolution urges Mahmoud Ahmadinejad’s, the Iranian president, government to treat the two as terrorist organisations.

It also paves the way for the resolution to become legislation which, if ratified by the country’s constitutional watchdog, would become law.

The government is expected to remain silent over the parliament resolution and wait for US reaction before making its decision.

On Wednesday, the US senate voted 76-22 in favour of a resolution urging the state department to designate Iran’s Islamic Revolutionary Guard Corps a terrorist organisation.

While the proposal attracted overwhelming bipartisan support, a small group of Democrats said they feared labeling the state-run organisation a terrorist group could be interpreted as a congressional authorisation of military force in Iran.

The Bush administration had already been considering whether to blacklist an elite unit within the Revolutionary Guard, subjecting part of the vast military operation to financial sanctions. 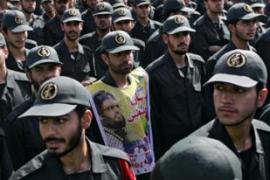 US to brand Iran Guard ‘terrorist’

Official confirms US set to formally put Revolutionary Guard on its terrorist list.