Renewed fighting between the government and rebels led by general Laurent Nkunda has blocked rangers from tracking 72 gorillas, according to Samantha Newport, a spokeswoman for Wildlife Direct.

Earlier this month Tutsi fighters loyal to Nkunda raided ranger stations in Virunga and seized rifles, looted equipment and supplies and forced the rangers and their families to flee, halting their monitoring work.

“The suspects said the gorilla was taken from DR Congo’s gorilla sector … and they were aiming to get $8,000 for the infant. The cause of death is unknown and the infant died about one week ago,” Newport said in a statement.

“It is thought that another gorilla is being held by the same group,” the statement said. Two other gorillas are still missing.

Newport said that after years of efforts to curb the trade in endangered species, the ICCN had thought trafficking in mountain gorillas “was pretty much wiped out … they were quite surprised when they found this out”.

But she said it was unclear what the gorillas were being trafficked for – or if other individuals may already have been smuggled out of the park and sold.

“It is entirely possible … We’ve had the civil war for 10 years and the country is still coming out of it. The tracking and monitoring has been limited by the stability or lack of stability in the region,” she said.

Congo’s mountain gorillas have survived many years of conflict in the east of the country and more than 150 rangers have been killed trying to protect the area’s five national parks from poachers and armed groups.

But this year up to ten mountain gorillas from Virunga, Africa’s oldest national park, have been killed, some to be eaten by rebel fighters or sold as “bush meat”.

In the worst incident, five gorillas were slaughtered and abandoned inside Virunga, an attack conservationists linked to a power struggle between local government agents trying to preserve the park and people profiting from illicit charcoal made from its trees.

Only around 700 endangered mountain gorillas remain in the wild, all of them living in the mountains of Rwanda, Uganda and the eastern DRC.

She said that despite the best efforts of organisations such as Wildlife Direct and the park rangers, such were the social problems affecting the country that the protection of the gorillas is a very low political priority.

“Their [the gorillas] plight is dwarfed by a human tragedy affecting hundred of thousands of people in the area caused by the recent fighting” she said.

“As a consequence the mountain gorillas could be heading further down the path of extinction in exchange for human life.” 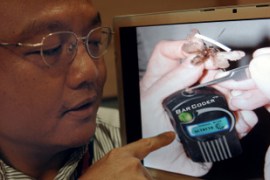 World’s species to be ‘barcoded’

Project described as the biodiversity equivalent of launching a rocket to the moon. 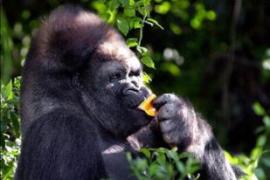 Annual report says the number of species in imminent danger of extinction has risen.