If succesful, Apostol said, Estrada could be freed by the end of the year.
No admission of guilt
Estrada, 70, had previously said he would not accept a pardon if it meant admitting guilt.
But, “if there is an assurance of an absolute pardon, which would not amount to an admission of guilt, I’m open to withdrawing any motion for reconsideration”, he told The Associated Press by telephone.
The former president is currently being held udner house arrest at his countryside villa near Manila.
He added that if the terms of the pardon were acceptable, he may decide not to pursue plans for an appeal against his September 12 conviction for plunder by the special anti-graft Sandiganbayan court.
The moves have sparked hopes that the long enmity between Arroyo and Estrada – which has caused political crises and frequent coup rumours – may finally ease.
Film star

Estrada pulled off the biggest election victory in Philippine history when he was elected to the presidency in 1998.

His six-year term was cut short in 2001 by a military-backed popular revolt, but the former action film star remains popular among impoverished Filipinos who adored his B-movies where he was often portrayed as a champion of the poor.
Estrada supporters have vowed to stage further protests following his conviction and security forces are on alert across the Philippines to prevent any explosion of violence.
Last week the military said it uncovered a fresh plot by anti-Arroyo forces to recruit troops to “destabilise” the government.
Convicted
Estrada was convicted after a landmark six-year trial for massive corruption while in office.
Found guilty of illegally building up a personal fortune of more than $80m through tax kickbacks and payoffs from gambling operators, his conviction carried the death penalty, but capital punishment has been abolished in the Philippines.
He was ordered to forfeit a mansion and more than $15.5m but was acquitted of perjury related to allegations he falsely declared his assets.
Estrada has denied the charges and accused Arroyo of masterminding his removal in a conspiracy with leaders of the Roman Catholic Church and senior military officers.
Arroyo, who has failed to shake allegations that she cheated in the 2004 elections, has herself been tainted by corruption scandals.
Last week, her husband, Jose Miguel “Mike” Arroyo, was implicated in a kickback probe into the $329-million National Broadband Network (NBN) project with China’s ZTE Corp.
The scandal could lead to a split with a major coalition partner in congress that could open the way for impeachment proceedings against the president.
Source: News Agencies 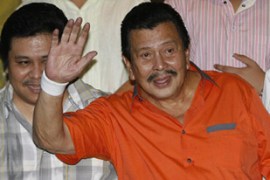 Ex-Philippines president says verdict is politcal as he is found guilty of plunder.