He told the meeting regional co-operation was vital to reinforce Iraqi efforts at reconciliation and “avoid exacerbating tensions”.

But Ban also said the security situation in Iraq remained “unstable” and that “more has to be done” before the UN presence could be substantially increased.

“I would really hope that security will be ensured as soon as possible,” he said.
“It’s true that … security has been improving, but I think much more has to be done.”
Many UN officials are deeply concerned about sending more staff to Iraq, after a bomb that destroyed its office in Baghdad in August 2003 and killed 22 people, including Sergio Vieira de Mello, the mission chief.
Marwan Bishara, Al Jazeera’s senior political analyst, said the UN had been put in a difficult position by the US.
“While the US surges its military and makes threats to Iran and Syria, it expects the UN to help calm the game,” he said.
Iraqi security
The talks in New York brought together representatives of 20 countries, including the five permanent members of the Security Council and Iraq’s eight neighbouring states.

Before the meeting, al-Maliki insisted that the security situation in Iraq was improving.

“The security situation … has begun to develop tremendously, and the Baghdad of today is different from the Baghdad of yesterday,” al-Maliki said after holding earlier talks with Ban.
Al-Maliki also said his government would provide any necessary security for an expanded UN presence in his country.
The Security Council voted to assign the UN an expanded political role in Iraq last month, including promoting reconciliation between rival factions and dialogue with neighbouring countries.
Bigger role
The US and Britain have pushed for a bigger UN role in Iraq but deny they want to offload the problems facing their forces onto the world body.
The meeting, held on the sidelines of a UN General Assembly session, brought together Condoleezza Rice, the US secretary of state, with Manouchehr Mottaki, her Iranian counterpart, at a time of tension over Iran’s nuclear ambitions.
The meeting also reviewed a five-year plan to stabilise Iraq on the political, economic and security fronts.
Al Jazeera’s Kristen Saloomey in New York said that relations between Iraq and the US remained “very tense” after the Iraqi government said it was investigating a US security firm over the alleged killing of Iraqi civilians in a shooting incident.
Source: Al Jazeera, News Agencies 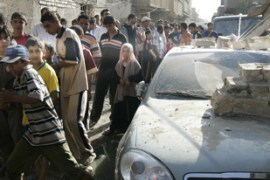 Arms allegedly smuggled into Iraq “may have been used against US forces”.

US halts diplomatic convoys in Iraq 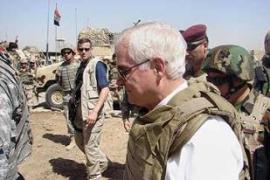