A committee headed by Yaakov Ganot, a former police chief, will examine the issue in the coming weeks.

Israeli authorities have been attempting to control a steady flow of refugees from Darfur, as well as other African and Asian countries, in recent years.

Their numbers have declined, however, since Israel agreed with Egypt to send refugees back across the border – just 150 Africans entered in September compared with 900 in July, an official said.

The tough stance on African refugees sparked debate over whether the country, founded after the Nazi persecution of the Jews during the second world war, has a moral obligation to take in people fleeing persecution.

In May, Daniel Friedmann, justice minister, said that Israel had a duty to accept refugees from Darfur, stating that Israel must adhere to the principles of “biblical compassion”.

“This is a question that is currently before the state of Israel, and there is a direct line with what occurred 3,000 years ago and more, at the time of the exodus from Egypt,” he said.

Israel is not a signatory to the Geneva Convention on the status of refugees.

Experts estimate that 2.5 million people have been driven from their homes in Darfur, and about 200,000 people have died, since 2003 when non-Arab fighters took up arms, accusing the Sudanese government in Khartoum of marginalising the region.

In addition to the Darfur refugees, there are currently around 1,700 refugees from other regions in Sudan, along with 700 from Eritrea and 600 from the Ivory Coast, according to the United Nations.

“All other refugees from African countries who are already in Israel as well as those who enter after today will be expelled to a third African country,” an official said on Saturday. 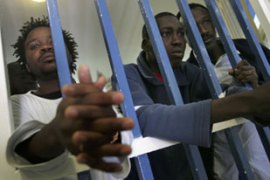 Israel to turn back Darfur refugees

Illegal migrants crossing from Egypt will be forced to return.