Last month’s flooding killed at least 600 people and left about a third of a million homeless.

There have been no reports yet of any deaths as a result of the latest floods.

Typhoon Wipha killed at least nine people in China earlier this week after it struck the country’s eastern coast.

Officials there had feared the storm would be one of the worst in recent years, but it rapidly lost strength after making landfall.

Wipha then regained strength once again as it headed across the sea toward the Korean peninsula.

Even before the August floods, North Korea was already reliant on international aid to help make up a food shortfall of about one million tons, or 20 per cent of its needs.

Experts say the clearing and terracing of hillsides to create more cropland is a major reason for the periodic severe flooding experienced in North Korea. 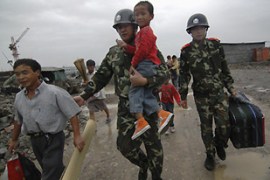 Typhoon kills nine, but casualties and damage far less than had been feared.