Bush said the 1978 law on surveillance was “dangerously out of date” and unable to deal with evolving technology such as disposable cell phones and the internet.
The law must be changed to give intelligence agencies the tools needed to prevent attacks on American soil, he said.
“Without these tools it’ll be harder to figure out what our enemies are doing to train, recruit and infiltrate operatives into America,” Bush said during a visit to the National Security Agency, which conducts surveillance of electronic communications on targets around the world.
“Without these tools, our country will be much more vulnerable to attack.”
The expanded powers expire in February and many Democrats in congress are wary of making them permanent, saying the Bush administration had abused their trust by not properly informing them of its eavesdropping activities.
They want more safeguards in any future legislation.
The debate is expected to surface in the confirmation hearings of Michael Mukasey, the retired federal judge who was nominated by Bush this week to replace Alberto Gonzales as attorney-general.
Source : News Agencies 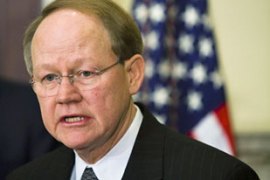 US to consider spy law changes