Thousands of Buddhist monks are reported to have joined anti-government marches in Myanmar, a day after police used tear gas and fired warning shots to break up a similar protest in the north of the country.

In the former capital, Yangon, a march of about 500 monks walked through the city streets after they were barred from entering the Shwedagon pagoda, one of the country’s most important religious sites.

Witnesses said the monks were watched by plainclothes security officials, but no action was taken to try to break up the march.

Other marches also took place in Myanmar‘s second city of Mandalay, and the north-western coastal city of Sittwe where witnesses said at least 2,000 monks had joined a protest march.

Several thousand residents watched the march, but were told by the monks not to join in, an unnamed local witness told Reuters.

A similar protest in Sittwe on Tuesday was broken up by security officials using tear gas and firing warning shots.

On Wednesday, a report in state-run New Light of Myanmar newspaper acknowledged that authorities had used force to break up the protests, saying the action had been taken after protesters had injured police and other officials.

The report blamed “bogus” monks and other instigators for starting the trouble.

It said senior Buddhist leaders had urged the monks to disperse, but the crowd retaliated by throwing stones and sticks.

The marches are in protest against the hardships caused by the military government’s economic policies, particularly last month’s sudden massive hike in the price of fuel.

The price rise has caused prices of basic commodities to soar and sparked a rare outpouring of public protest in Myanmar.

Initially the protests were led by pro-democracy activists, many of whom have since been arrested.

More recently Myanmar‘s legions of Buddhist monks have begun to take up the lead.

Monks are deeply respected in devoutly Buddhist Myanmar and have frequently been at the forefront of anti-government protests since the days before the country, then known as Burma, won its independence from Britain.

Tensions are already high following last month’s fuel price hike, and observers say that if the generals decide to crackdown on the monks they risk inflaming public anger even further. 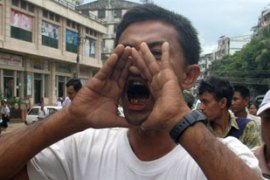 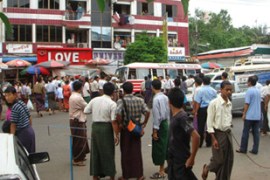