Seven police officers who went to investigate the crater were given oxygen and taken to hospital after suffering from similar symptoms.

“This is caused by the gas they have inhaled after the crash,” Lopez said.

Renan Ramirez, an engineer for the Peruvian Nuclear Energy Institute, said a team of scientists found no radiation at the crash site and confirmed that the crater was not created by a fallen satellite.

“If it had been the case, the strike would have let out radiation and contaminated the area,” he said.

The illnesses that struck the local population may have been caused by sulphur, arsenic or other toxins that may have melted in the extreme heat produced by the meteorite strike, Ramirez said.

“It is a conventional meteorite that, when it struck, produced gases by fusing with elements of the terrain,” he said.

Lopez said none of the patients was in a serious condition, but that they would have to undergo blood and neurological tests as a precaution in three to six months.

Quispe, the town’s mayor, said residents feared the fumes may have exposed them to long-term health problems, while others were concerned that more objects could fall from space.

Residents also reported a change in behaviour among cattle and sheep that they said were “acting strangely and refuse to eat,” the mayor said.

Three geologists from Peru’s Geophysics Institute are expected to present a report on the incident on Thursday. 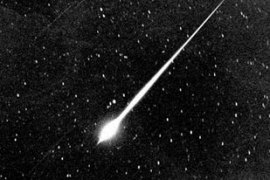