Tensions have been on the rise in the area since Hamas took control of the Gaza Strip in mid-June.
Israeli rationale
Israel said its move, coinciding with a visit to the region by Condoleezza Rice, the US secretary of state, to promote a US-proposed Middle East peace conference, was a response to frequent cross-border rocket fire by armed groups in Gaza.
At a joint news conference with Rice in Occupied Jerusalem on Wednesday, Tzipi Livni, Israel’s foreign minister, said the Israeli cabinet “made this decision according to our legal advisers, so it is according to international law”.
Livni said any moves to turn off the taps “is not going to affect the humanitarian situation in the Gaza”, but cautioned that “all the needs that are more than the humanitarian needs will not be supplied by Israel to the Gaza Strip”.
Palestinian response

Speaking to Al Jazeera on the Israeli announcement, Saeb Erekat, senior Palestinian negotiator and spokesman for the West Bank-based government, called the Israeli move “illegal and null and void”.

“I believe Gaza and West Bank are still under Israeli occupation. Under no circumstances can Israel view it as an ‘enemy entity’. Gaza as not an independent state, Gaza is under occupation,” he said.

“This is a decision in total violation of international law, it is a collective punishment, and a preparation for further military escalation against the 1.5 million people of Gaza.

“At the end of the day, it will not end the cycle of violence but complicate matters and breed more violence.”

Earlier, Fawzi Barhoum, a spokesman for the Gaza-based Hamas government, told Al Jazeera: “This is a declaration of war against Hamas [at a time when] all the Palestinian military factions are supporting the Hamas resistance project.

“The occupation is targeting Palestinians dead or alive. They want the Palestinian people to revolt against Hamas, to make it weaker.

“But the Palestinian people are supporting Hamas by all means because Hamas continues to refuse to recognise this occupation or end its resistance programme.”

With Israel maintaining tight control over Gaza’s borders, air space and coastal waters, as well as withholding Palestinian tax revenue, the strip is largely reliant on Israel for utilities and humanitarian aid imports.

Olmert’s office said his security cabinet approved the “enemy entity” classification and there would be “limitations on imports to the Gaza Strip and a reduction in the supply of fuel and electricity”.

It said the sanctions would be implemented after the Israeli authorities examined the legal and humanitarian ramifications.

By formally defining the Gaza Strip as an enemy entity, Israel could argue that it cannot be bound by international law governing the administration of occupied territory to supply power to the its population of 1.5 million.

Hamas forces, which seized control of Gaza in June after fighting with the rival Fatah faction, have been bracing for a broader Israeli offensive, particularly since a rocket struck an Israeli military base last week, wounding around three dozen soldiers.

Three Palestinian factions on Wendesday said that they have fired rockets at Israeli targets near Gaza Strip in retaliation for “Israeli occupation crimes”.

In a joint statement, al-Aqsa Martyrs Brigades and al-Quds Brigades, the armed wing of the Palestinian Islamic Jihad group, have said that their fighters targeted an Israeli intelligence base at Kisovim crossing, south of the Gaza Strip and another post near al-Bureij refugee camp, east Gaza Strip.

The Israeli military confirmed that Sderot had been targeted. 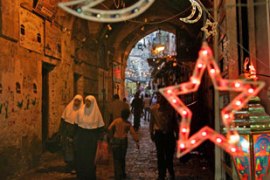 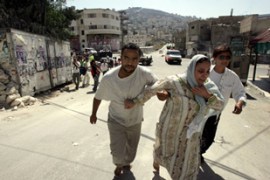 Palestinian man killed by Israeli troops in Nablus reported to be handicapped. 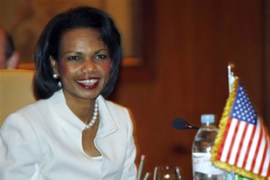 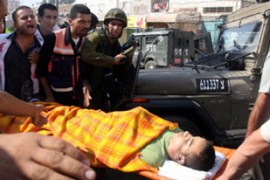 Deaths in Israeli raid on Nablus